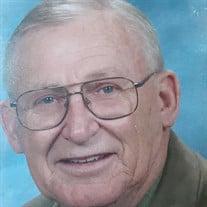 James M. Roberts, Jr. (Jim), age 84 of Dayton, passed away on Thursday, September 23, 2021, after a short illness with cancer. He was born in Greenville, TN, on April 14, 1937. He grew up in Waterville, NC, attended Clemson College in Clemson, SC, and graduated from Carson-Newman College in 1968. Jim was a member of the First Baptist Church in Dayton where he was an active Deacon and Sunday School Director. He was a member of the Masons, Eastern Star, and the Lions Club. He served as Scout Master to the local Scout Troop #194 for many years. He was retired from TVA as a fisheries biologist. He was preceded in death by his parents, Mitch and Nell Roberts. His survivors include his wife of 60 years, Alda Roberts; his son Jamie (Carmen) Roberts; his six grandchildren, Noah, Seth, Luke, Susan, Christian, and Matthew Roberts. He is also survived by his sisters-in-law, Ann and Ronda; several nephews, great nephews and nieces; great-great nieces; and several cousins. He is survived by his life-long friends, Charles Lewis Moore and Charlie Tingen. The family would like to extend a special Thank You to Ann and the Hearth Hospice team for their care. Jim was an organ and tissue donor, and his remains will be cremated. A Celebration of Life Service will be held at First Baptist Church on Saturday, October 2, 2021. The family will receive friends from 1:30 to 3:30 p.m. at the church with the service beginning at 3:33 p.m. Interment will be at Union Cemetery in Newport, TN, at a later date. Please share your memories and photos of Jim on his online guest register at www.vanderwallfh.com. The family is being cared for by Vanderwall Funeral Home in Dayton, TN.

James M. Roberts, Jr. (Jim), age 84 of Dayton, passed away on Thursday, September 23, 2021, after a short illness with cancer. He was born in Greenville, TN, on April 14, 1937. He grew up in Waterville, NC, attended Clemson College in Clemson,... View Obituary & Service Information

The family of James "Jim" M. Roberts Jr. created this Life Tributes page to make it easy to share your memories.

Send flowers to the Roberts family.