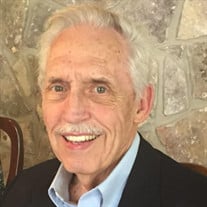 William Eugene Robinson, affectionately known as W.E. to his myriad friends and flying buddies, died peacefully Tuesday, January 25, 2022 in Knoxville, Tennessee. He was preceded in death by his beloved wife Elsie Beene Robinson, his parents Mary Henderson and William Thomas Robinson and his son-in-law, Skip Griffin. He was a lifelong member of First United Methodist Church. The Robinson clan was a founding family in Rhea County and established Robinson Manufacturing Inc. on the eve of the Great Depression in 1927. W.E. joined the company in the late 1950s, and was a part of its wildly successful ventures as it remains a stalwart leader in Dayton’s economic rise. A graduate of the Rhea County Schools, and the University of Tennessee, he joined Phi Gamma Delta fraternity & majored in Engineering. W.E. was commissioned into the United States Air Force, where he mastered the art of aircraft as a T-33 jet instructor. Thus began his lifelong love of flying. His first airplane was a Cessna 150, then a Cessna 172 and finally, his dream plane, a Cessna Twin 310. A highly trained instrument pilot, he attended flight safety training yearly and enjoyed fly-in breakfasts with the Tennessee Civil Air Patrol. He spearheaded the local airport's growth from an air strip to a fully rated facility. To thank him for this accomplishment and for getting the community behind the effort, in 1999 The Dayton Mark Anton Airport named the new terminal the William E. Robinson Terminal. When his wife Elsie became ill, the two would fly that Cessna to their home on St. Simons Island, where they loved making new friends and enjoying beach life. Before Elsie died in 2014, W.E. took on a further role as her loving care giver. Always curious and willing to try just about anything -- especially when it was said: "That can't be done." As a young recently married man, he decided to build a passive solar home in Dayton, and he did. With this futuristic vision, he & his father designed and built the family’s sustainable energy mid-century home. But W.E., always a Renaissance man, pursued additional interests, including photography. He built a darkroom and developed black-and-white large format film. He often volunteered as a photographer for Jimmy Cunningham Photography. His greatest love was using his musical abilities to entertain as friends and family would break out in spontaneous song and dance. W.E.’s greatest popularity likely came near the end of his life, when he entertained residents at his assisted living home. With his fine tenor voice, at the keyboard he would belt out enduring tunes from the '40s and '50s “Great American Songbook”. Survivors include his children, Joan Robinson Whiteside, Knoxville; Katherine Robinson Griffin, Dayton, and John Charles Robinson and daughter-in-law, Angela, Hallandale Beach, Florida. Also surviving are beloved grandchildren, Emily McCoy (Andrew); Grace McNeilly (Brandon); Ben Whiteside, Knoxville; Christopher Robinson (Natalia), Hallandale Beach, Florida; Daniel Robinson (Nicole), Wellington, Florida; William Robinson, New York; Matilda Griffin Patton (Clay), and Ray W. Griffin III (Nini), Chattanooga. And W.E. delighted in his great-grandchildren, Lily and Ruby McCoy, Lucy and Clementine McNeilly, Knoxville, and Will (Breanna), Mac, Jack Patton and Charlie Griffin, Chattanooga. The funeral service with military honors will be held at 2 p.m. Saturday, February 19, 2022 at Dayton First United Methodist Church with the Rev. Layne Pennington officiating. Live streamed at https://www.facebook.com/events/934009363920389. Following the service, the family will receive friends at the Robinson Guest House. Memorial contributions may be made to First Methodist Church, 993 Market Street, Dayton, TN 37321 or Rhea County Community Center, 232 4th Avenue, Dayton, TN 37321. The family shares this intriguing story: When W.E. was young, he was expert on his Conn brass bell trumpet - so fine a trumpeter that he was often asked to play at funerals. He would hide amongst the trees where he could not be seen and play taps at the close of graveside services. So, here's to you and your extraordinary life, W.E.! Day is done, Gone the sun, From the lake, From the hill, From the sky. All is well, Safely rest, God is nigh. Please share your memories and photos of W.E. on his online guest register at www.vanderwallfh.com. The family is being cared for by Vanderwall Funeral Home, Dayton, TN.

The family of W.E. Robinson created this Life Tributes page to make it easy to share your memories.

William Eugene Robinson, affectionately known as W.E. to his...