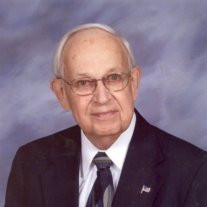 William Henry Helrigel, age 92, died Thursday, February 21, 2013 at Life Care of Red Bank. He was born July 23, 1920 in Kalamazoo, MI to the late William H. and Alta Mae (Bell) Helrigel. He was also preceded in death by his wife Isabel (Nixon) Helrigel. He lived in Albion, MI from 1939 until 1982, then in Hendersonville, NC from 1982 until 2001 before moving to Signal Mountain in 2001. Bill served his country in the U.S. Navy in the South Pacific during WWII. He attended Albion College and the Cincinnati College of Mortuary Science. He was a retired funeral director and embalmer and a past owner of several funeral homes in the Albion area. Bill was a member of the Signal Crest United Methodist Church. He was an active Methodist layman in the West Michigan, West North Carolina and Holston Annual Conference, delegate to General Conferences, the World Council, former vice president of Michigan Conference, Epworth League, president of Michigan Conference Young Adults, president of Michigan Conference Board of Education, member of General Conference Board of Education, active member of the 29’ers Christian Work Projects Group for 18 years, lay member of West Michigan, West North Carolina and Holston Conferences several times. He is survived by his son Gary (Christine) Helrigel of Signal Mountain,TN two daughters Gina (William) Frazier of St. Louis, MO and Cathryn (Sherman) Pierce of Birchwood, TN four grandchildren and four great-grandchildren. Funeral services with military honors will be held Sunday at 2:00 p.m. at the Signal Crest United Methodist Church on Signal Mountain with his pastor Rev. Mark Gooden officiating. The family will receive friends one hour prior to the funeral. He will be laid to rest next to his wife at the Riverside Cemetery in Albion, MI. Memorial contributions may be made to his church. Please share your memories of William on his on-line guest register at www.vanderwallfh.com. The family is being served by the Vanderwall Funeral Home in Dayton,TN

The family of William Henry Helrigel created this Life Tributes page to make it easy to share your memories.

Send flowers to the Helrigel family.