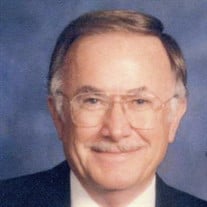 William Moreland “Bill” Bishop Jr. passed away August 6, 2021, in Murrieta, CA. He was born May 25, 1931, in Placerville, El Dorado County, CA, to William Moreland Bishop and Gladys Ila (Henry) Bishop, the first of five sons. After graduating from high school in Lomita, CA, Bill was employed at the worldwide petrochemical engineering company, C F Braun & Co in Alhambra, CA. until his retirement in 1996, having worked his way up from the Blueprint Department to Project Management. During this time, the company became Santa Fe International, then Brown & Root Inc. Bill was on company field assignments in Dominguez, CA; Beaumont, TX, Chicago, IL, Chattanooga, TN, Denver, CO and Kuwait in the Middle East. It was during his assignment in Chattanooga that he met and married Fay Shaver Fugate in 1972. An avid genealogist, Bill was, at one time, a member of Historical and Genealogical Societies in California, Colorado, New Mexico, and Virginia. Bill contributed his family history to Colorado Families: A Territorial Heritage; The Whitehills in America (Heroes and Heroines); and Dinwiddie County Virginia – Heritage 1792-2006, including contributions to other books about Sheriff Harvey H Whitehill, his great grandfather . He also researched published a book on his family: The Bishop Family of Dinwiddie County, Virginia. He was among ten members of The Colony Cousins Genealogy Club who researched and published Murrieta Pioneers Buried in the Laurel Cemetery, Murrieta, California, as a community service project. He was a founding member of the Eagle Chapter Sons of the American Revolution where he served in the Chapter’s color guard and as Chapter Secretary for a number of years. Among Bill’s proudest achievements were (1) establishing the mining claim and gravesite of his grandmother, Josie Bishop, as a State of California Point of Historical Interest in Kern County, KER 010, later holding dedication ceremony of a monument erected nearby; (2) getting an unnamed canyon running across the family property near Lake Elsinore in Southwest Riverside County named after his father, William Moreland Bishop, Sr. (3) the design and installation of a large stone sign and plaque at the Second Shaver Cemetery near Dayton, TN; (4) having mounted a bronze plaque on the new Town Hall in Mineral, Louisa County, VA honoring his Great Uncle, Walter Leonard Bishop, one of the founders of the Town of Mineral who developed the map establishing the town layout, and Great Grandfather William Bolling Bishop, a Confederate veteran. Both are buried in Mineral in unmarked graves in a resident’s yard; and 5) helped in restoring the First Shaver Cemetery as well as purchased and had installed a grave marker at an unmarked gravesite there. He was preceded in death by his parents and four brothers, Robert, Raymond, Donald and John Bishop. His survivors include his wife, Fay Bishop of Murrieta, CA; children, Ronald Dean Bishop of Truckee, CA, Richard Dale (Patti) Bishop of Palm Desert, CA, Robert Fugate, and Katholeen (Fugate) Miller, and her husband Howard Steven Miller of Littleton, CO; six grandchildren; 18 great grandchildren including granddaughter Robin Bishop-Latona and husband Joseph Latona of San Diego, CA, with triplets, Anthony, Dominic and Devyn; grandson Ryan Dean Bishop and his wife Amy of Ammons, Idaho, with Nicholas, Ayden, Sean and Abbie Bishop; granddaughter Kimberly and her husband Dr. Ben Davidson of Reno, NV with Zachary Wheeler, Colton and Kendall Clouser, Kennedy and Cameryn Davidson; granddaughter Katie and her husband Jeff Gress of Vacaville, CA with Kylie and Ellie Perkins, Blake, Brady, Lexie and Korie Gress; and granddaughters Shelby Miller and Grace Miller of Colorado; sisters in law, Linda Hinds of Dayton, TN, Ruby Bishop of Houston, TX, Mary Nell Shaver, JoAnne Shaver, Phyllis Shaver, and Linda Shaver, all of Dayton, TN; and several nieces and nephews in Tennessee, Texas, Arizona, and California. Bill and Fay attended Rancho Community Church in Temecula, CA. Funeral services for Bill will be held on Saturday, August 14, 2021 at 12 noon in the funeral home chapel with Dr. Danny Reuhling officiating. He will be laid to rest with military honors in the Second Shaver Cemetery with Rev. Clyde Fitzgerald officiating. Please share your memories and photos of Bill on his online guest register at www.vanderwallfh.com. Memorial contributions may be made to the Shaver Cemeteries Perpetual Care Fund c/o Melissa Farnsworth, 2660 Ogden Rd., Dayton, TN 37321, or your favorite charity. The family is being cared for by Vanderwall Funeral Home in Dayton where they will receive friends one hour prior to the service.

The family of William Moreland "Bill" Bishop Jr. created this Life Tributes page to make it easy to share your memories.

Send flowers to the Bishop family.