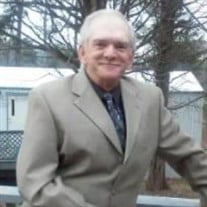 Wendell Jones Gornik, age 73 of Corryton and formerly of Dayton, passed away on Monday, March 21, 2022 at Tennova North Knoxville in Powell. He was born in Dayton on February 7, 1949, the son of the late Joseph V. Gornik and Mary Ellen (Revis) Gornik. He was also preceded in death by his first wife of 32 years, Helen Faye (Walker) Gornik; his two grandchildren, Dakota Justin Miller and Jasmine Breanna Watson; and his three brothers, Jim Marler, Doug Gornik, and Dickie Gornik. Wendell was born and raised in Dayton, was a graduate of Rhea Central High School, lived in Paducah, KY, from 1993-2008, and then moved to Corryton, TN. He was employed as a hotel manager and insurance agent. He served his country in the US Army in Viet Nam. He enjoyed going to flea markets and was a member of Kelly Grove Baptist Church. He is survived by his wife, Tammy (Haun) Gornik of Corryton; his two sons, Chris (Amanda) Gornik and Brent (fiancee’ Terry Ann Dotson) Gornik of Dayton; his two daughters, Cindy Gornik of Oklahoma City, OK, and Missy (Chris) Watson of Spring City; his brother, Randy (Samantha) Gornik of Cagle Mountain; his two step-sons, James Tucker of Powell and Andrew (Amanda) Tucker of Knoxville; his five grandchildren, Courtney Reed Gornik, CJ Gornik, Rufus Gornik, Helanna Watson, and Gage Watson; his two step-grandchildren; his great-grandson, Cayson Gornik; and his “adopted” mom, Shirley Haun of Powell. Funeral services for Wendell will be held on Thursday, March 24, 2022, at 12:00 noon in the funeral home chapel with Rev. Stanley Faulkner officiating. He will be laid to rest with military honors in Spence Cemetery next to his first wife Helen. Please share your memories and photos of Wendell on his online guest register at www.vanderwallfh.com The family is being cared for by Vanderwall Funeral Home in Dayton, TN, where they will receive friends on Wednesday, March 23, 2022, from 4:00 p.m. to 7:00 p.m.

Wendell Jones Gornik, age 73 of Corryton and formerly of Dayton, passed away on Monday, March 21, 2022 at Tennova North Knoxville in Powell. He was born in Dayton on February 7, 1949, the son of the late Joseph V. Gornik and Mary Ellen (Revis)... View Obituary & Service Information

The family of Wendell Jones Gornik created this Life Tributes page to make it easy to share your memories.

Wendell Jones Gornik, age 73 of Corryton and formerly of Dayton,...

Send flowers to the Gornik family.