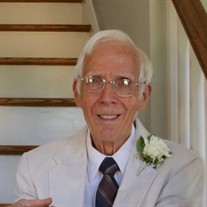 Vern Allen Archer, age 89, of Hixson, went to be with Jesus on Tuesday afternoon, November 19, 2019, at Erlanger Medical Center in Chattanooga. He passed away peacefully surrounded by his family and loved ones. Vern was born on January 22, 1930, at the family farm in Randolph, NY, the son of the late Lawrence and Helen (Covert) Archer. Vern was also preceded in death by his brothers, Leroy Archer, Ronald Archer, and Willis Archer. Vern lived in Hixson since 1990 and previously lived in Dayton. He was a Randolph High School graduate Class of 1948 and earned his bachelor’s degree in business/accounting at the University of Buffalo, NY. Vern served his country as a Sargent in the US Army, 2 nd Infantry, in Korea, and was awarded a Bronze Star for his service. He was an accountant and treasurer for 20 years with Bryan College in Dayton and a finance manager with Siskin until his passing. Vern was a member of the Grace Bible Church in Dayton, Abba’s House in Hixson, and Dallas Bay Baptist Church in Hixson. Vern’s life was marked by one thing: service. He lived his life in service to his wife and family, his community, his country, and his Savior. He was always fixing, building, cleaning, creating, caring for others – always serving. Vern was also known for his deep devotion to his wife, the generosity he showed others, his many antics with his beloved late twin brother, Willis, the sweet notes he wrote, and his love of vanilla ice cream. He is survived by his wife of nearly 64 years, Helen Archer, whom he married on December 26, 1955; his daughter, Carolyn Crider of Chattanooga, TN; his son, Dale (Annette) Archer of Fuquay Varina, NC; four grandchildren, Joshua Harmon, Julia (Michael) Kurschner, Courtney Archer, and Carrie (Brian) Cook; and three great-grandchildren, Liam Kurschner, David Kurschner and Noah Kurschner. Visitation for Vern will be held Saturday from 1 p.m. to 3 p.m. with the service immediately to follow at Dallas Bay Baptist Church in Hixson, TN with Rev. Ken Young officiating. He will be laid to rest in his hometown of Randolph, NY. The family is being cared for by the Vanderwall Funeral Home in Dayton, TN. Please share your memories of Vern on his online guest register at www.vanderwallfh.com. In lieu of flowers, donations can be made to Samaritan’s Purse, Bryan College, or the Billy Graham Evangelistic Association.

Vern Allen Archer, age 89, of Hixson, went to be with Jesus on Tuesday afternoon, November 19, 2019, at Erlanger Medical Center in Chattanooga. He passed away peacefully surrounded by his family and loved ones. Vern was born on January 22, 1930,... View Obituary & Service Information

The family of Vern Allen Archer created this Life Tributes page to make it easy to share your memories.

Send flowers to the Archer family.