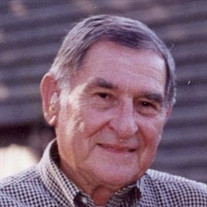 Truman Callaway Tucker died Monday, April 9, 2018, at his home in Dayton with his family near him. He was preceded in death by his parents Jobe and Grace Hollingshead Tucker; brothers, Creed, Delano and Carroll; and sister Birdie Veal Martin, all of Tellico Plains, Tennessee. Truman was retired from the Knoxville City and Knox County Schools having served as president of the Knoxville Education Association. He taught wood technology and was a charter life member of the Tennessee Industrial Arts Association. Prior to teaching, he was elected Monroe County Property Assessor and was president of the Tennessee Association of Assessing Officers during his term. He was a veteran of both the US Army and Air Force, primarily serving in present-day Alaska and McDill Air Force base in Florida. He was a lifetime member of the American Legion Sweetwater Post 106, Veterans of Foreign Wars Sweetwater Post 5156, and Disabled American Veterans Sweetwater Chapter 93. He previously served as officer of the Veterans Affairs office of Monroe County. For many years he served as a member of the VFW’s Military Honor Guard at funerals of veterans and military celebrations. Throughout his life, Truman supported numerous civic and community organizations. He was a member of the board of the Beck Cultural Exchange Center in Knoxville and a member of the Sacred Circle of St. Labre Indian School of Ashland, Montana. For many years he enjoyed life on the family cattle farm in Sweetwater. He is survived by his wife, Rebecca Fitzgerald Tucker; sons, Scott Karas (Michelle) Tucker of Knoxville and Andrew F. (Amber) Tucker, grandchildren, Lillian Leigh and Philip of Dayton; and brother, Reed Tucker of Tellico Plains, Tennessee. The family will receive friends Tuesday, April 10, from 5 p.m. - 8 p.m. at Vanderwall Funeral Home. Graveside services with full military honors will be held Wednesday, April 11, at 12:00 p.m. at the Shaver Cemetery. Rev. Clyde Fitzgerald and Rev. T.J. Burdine will officiate the service. The family requests that in lieu of flowers, memorial contributions be sent to the scholarship fund at Rhea County Academy, where his grandchildren are students. Rhea County Academy, Tucker Memorial, 123 Summerfield Lane, Dayton, TN 37321. Please share your memories of Truman on his online guest register at www.vanderwallfh.com .

Truman Callaway Tucker died Monday, April 9, 2018, at his home in Dayton with his family near him. He was preceded in death by his parents Jobe and Grace Hollingshead Tucker; brothers, Creed, Delano and Carroll; and sister Birdie Veal Martin,... View Obituary & Service Information

The family of Truman Callaway Tucker created this Life Tributes page to make it easy to share your memories.

Send flowers to the Tucker family.