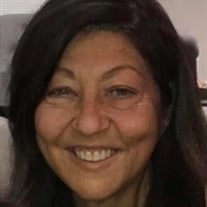 Quintina Ann “Tina” Stone, passed away on Tuesday, April 5, 2022, at the Courtyard in Dayton. She was born on June 5, 1958, in St. Albans, WV, the daughter of the late Quinton “Pete” Webb and Elizabeth “Libby” (Adkins) Webb. She was also preceded in death by her sister, Tamra Fore. Tina graduated from St. Albans High School in West Virginia, attended West Virginia State University, received her Bachelor’s degree in education from Belmont University in Nashville, and later earned her Master’s degree in education. She moved to Dayton in the early 1980s, was a teacher, and became the Special Education Coordinator at Rhea County High School. She was also a cheerleading coach, coached basketball, was the owner and operator of Tina’s School of Dance, and was a majorette in the 1976 Rose Bowl Parade. She enjoyed attending the events that her grandchildren were participating in and was a member of New Union Baptist Church. She is survived by her two children, J.T. (Hayley) Stone and Meghan Stone, both of Dayton; her four grandchildren, Jacelyn Stone, Jantzen Travis, Jayven Hartman, and Truett Stone; her fifth grandchild that is coming, baby boy Stone; her brother, Tim Webb of Chattanooga; and her four nieces and nephews, Beth Guinn, Michael Fore, Colby Webb, and Quincy Webb. Funeral services for Tina will be held on Thursday, April 7, 2022, at 6:00 p.m. in the funeral home chapel with Dr. Danny Ruehling officiating. She will be laid to rest at Spence Cemetery on Friday, April 8, 2022, at 11:00 a.m. with Rev. Jeremy Deal officiating. Please share your memories and photos of Tina on her online guest register at www.vanderwallfh.com. The family is being cared for by Vanderwall Funeral Home in Dayton, TN, where they will receive friends on Thursday, April 7, 2022, from 4:00 p.m. until the time of the service.

The family of Tina Ann Stone created this Life Tributes page to make it easy to share your memories.

Send flowers to the Stone family.