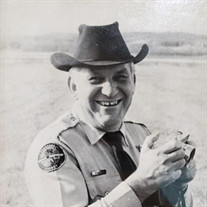 Thomas Aaron Crawley, 90, of Sale Creek, TN, passed away peacefully early Saturday morning, August 10, 2019 at CHI Memorial Hospital in Hixson after a brief illness. He was a member of Dayton First Baptist Church. Tom was the son of the late Drewia A. & Nola Jordan Crawley of Sale Creek. He was born at the Crawley family farm on November 12, 1928. As a young man, he worked on the farm, a dairy operation and peach orchard. He was active in Future Farmers of America (FFA). At age sixteen, already president of the local 4H Club For Boys, Tom was selected from a field of 700 to represent Hamilton County at the National 4H Club Congress in Chicago. In 1953, he began working for the Tennessee Game & Fish Commission (TWRA) as a wildlife agent in Grundy County. He was then transferred to Bradley County where he worked for several years. Later, he moved to Nashville where he served as Lieutenant, covering a ten county area. Some months later, he was transferred back to Bradley County as District Captain & Area Supervisor. In 1967, Tom was named Tennessee Wildlife Officer of the Year while representing Tennessee at the Southeastern Wildlife Conference in New Orleans. For many years, he wrote an outdoor information column for the Cleveland Daily Banner as well as hosting an informational hunting & fishing radio broadcast at both WBAC and WCLE in Cleveland for ten years. After his retirement in 1986, he left Cleveland to work on his father’s farm, establishing a ten acre peach orchard. After his father’s passing, he continued to manage and maintain more than one thousand peach trees in addition to an abundant tomato crop. And in 1997, Tom was inducted into the Sigma Phi Epsilon fraternity as a Renaissance Man in the TN Eta chapter. Like his father before him, he was honored with an induction into The Hamilton County Agricultural Hall of Fame and was later also inducted into The Bradley County Agricultural Hall of Fame due to his passion for land, nature, and farming. Most recently, in April of 2019, the Tennessee State Senate passed a resolution sponsored by Senator Bo Watson and signed by Governor Bill Lee honoring Tom for his extensive lifetime achievements in agriculture. Tom was preceded in death by his parents, Drewia A. & Nola Jordan Crawley of Sale Creek, two brothers, Orval A. Crawley of Charleston,TN & Albert B. Crawley of Knoxville and their families respectively, his wife Virginia Lane Crawley, and his son Thomas (Tommy) E. Crawley. He leaves his legacy to his survivors, daughter Judy Crawley Robinson of Cleveland, granddaughter Kris Crawley Cobb (Kevin) of Sale Creek, grandsons Lane E. Crawley (Kathleen) of Murfreesboro & Aaron M. Robinson (Ashley) of Old Hickory, TN, as well as beloved great-grandchildren Kully & Kolt Cobb of Sale Creek, Sean, Derrick & Corey Crawley of Murfreesboro, and Finlay Robinson of Old Hickory. He was so very loved by many and will be greatly missed by his family and friends. Funeral services for Tom will be held Saturday afternoon at 5:00 p.m. in the funeral home chapel with Pastor Milton Knox officiating. He will be laid to rest in Rhea Memory Gardens in Dayton. Please share your memories of Tom on his online guest register at www.vanderwallfh.com. The family is being cared for by the Vanderwall Funeral Home where they will receive friends Saturday after 2:00 p.m.

Thomas Aaron Crawley, 90, of Sale Creek, TN, passed away peacefully early Saturday morning, August 10, 2019 at CHI Memorial Hospital in Hixson after a brief illness. He was a member of Dayton First Baptist Church. Tom was the son of the... View Obituary & Service Information

The family of Thomas Aaron Crawley created this Life Tributes page to make it easy to share your memories.

Send flowers to the Crawley family.