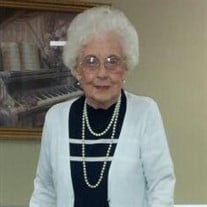 Thelma Lee Flood White, age 90, of Chattanooga, TN, passed away surrounded by her family on July 26, 2014, to be reconciled to our Lord and Savior. Thelma was born in Mountain View, MO, on August 19, 1923, to Lee Walter Flood and Bertha Yarber Flood. She spent much of her early life in Mountain View, MO, Springfield, MO, and Glenside, PA, before retiring with her longtime sweetheart, Bill, to Chattanooga, TN. Thelma was a graduate of Draughon Business College in Springfield and went on to build a career in accounting. She was employed through the years by Abington Hospital, Reit Fuel Oil Company, and Coca Cola Bottling Company before staying home to raise her two children. Thelma was passionate about our great country and was an advocate of many organizations that fought to protect our freedoms. Thelma was married for 65 years to William (Bill) Hibler White, who preceded her in death. Her faithfulness to God was expressed most beautifully by her devotion to Bill, and their love story is a testament to God’s providence. Brought together on a blind date, they were held together by unending love and dedication and were an inspiration to all who knew them. Thelma and Bill were active members of the Young at Heart class at the East Ridge church of Christ where they worshipped with so many that they loved. They spent much of their retirement traveling together across the U.S., ultimately reaching 49 of 50 states! Mrs. White is survived by her sister, Ruth Helen(Max) Donaldson, and her children, Bob(Charlotte)White of Harrison, TN and Mary(David) Lasley of Bentonville, AR. She was a proud grandmother to 7 grandchildren and 14 great-grandchildren. Grandchildren include: Jennifer (Will) Brewer of Ooltewah, TN; Bradley (Ashley) White of Knoxville, TN; Denise Snider of Memphis, TN; Michelle Snider of Memphis, TN; Amber (Jason) Robertson of Ooltewah, TN; Amanda (Matt) Neely of Dayton, OH; Jason (Lauren) White of Nashville, TN. She is also survived by several nieces and nephews. Thelma was lovingly known as “Nana” by her grandchildren and great-grandchildren. Graveside services will be held on Saturday, August 2, 2014, at 10:00 a.m. at Hazelwood Cemetery, Springfield, MO. In lieu of flowers, donations may be made to Boyd-Buchanan School (Chattanooga, TN); Martin-Boyd Christian Home (Chattanooga, TN); or East Ridge church of Christ Young at Heart Class Fund (Chattanooga, TN).

Thelma Lee Flood White, age 90, of Chattanooga, TN, passed away surrounded by her family on July 26, 2014, to be reconciled to our Lord and Savior. Thelma was born in Mountain View, MO, on August 19, 1923, to Lee Walter Flood and Bertha Yarber... View Obituary & Service Information

The family of Thelma L White created this Life Tributes page to make it easy to share your memories.

Send flowers to the White family.