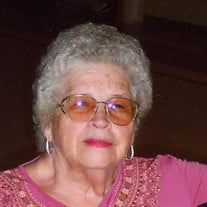 Ruby L. Revis, age 87, of Dayton received the ultimate Christmas gift on Christmas Eve evening. The angels in heaven swooped down and carried her away to her Lord and Savior Jesus Christ. What a homecoming she was given by her loved ones there. She was born April 10, 1930 in Frostproof, FL to the late Ola and Myrtle (Gentry) Rice. At heaven’s gates she was met by her late husband R.C. Revis, her son Roger Revis and her sister Evelyn Dupree. Ruby retired from Pete Smith’s Watts Bar Resort after more than 20 years as the baker. She was a wonderful cook and her family were the lucky recipients of her tasty dishes. At a young age, we, who had grown up eating pinto beans and fried potatoes and cornbread, were introduced to fancy dishes we had never heard of…Quiche, Chicken Parmesan, Shrimp Creole, Crepes, the infamous Cucumber Jell-O, and all those delicious pies. She was of the Church of God faith. Ruby would never miss a NASCAR race, VOLS football game, her soaps, Big Brother, and daily Jimmy Swaggart church ministry. Her passion was quilting and these quilts are treasured by each of us who own one. Left behind to cherish her memory are her three sons, Bobby Revis of Dayton, Mike (Bert) Revis of Graysville and Dale Revis of Evensville, her two daughters Jackie (Larry) Reed and Chris Revis, all of Dayton, one sister Mildred (Felix) Mikel of Evensville, nine grandchildren, Jill (Jeff) Davis, Joy (Orin) Brown, Shannon Revis, Justin (Regina) Revis, Brandon Revis, Heath (Lauren) Revis, Keith Revis, Joshua Revis, Jeremy Revis, and adopted granddaughter Tami Gadd, and ten great-grandchildren Faith Davis, Shelby Davis, Ethan Davis, Blaire Brown, Chloe Revis, Ava Revis, and Victoria Revis, as well as Hunter Holland, Ashley Holland and Kaylin Lovelady and many nieces and nephews. Funeral services for Ruby will be held Wednesday at 2:00pm in the funeral home chapel at Vanderwall Funeral Home with her nephews Rusty Revis and Aaron Revis officiating. She will be laid to rest next to her husband in Spence Cemetery, followed by a white dove release. The family wishes to thank the staff of Rhea Medical Center for the excellent care given to our Mama during her stay there. Sometimes angels masquerade as nurses and those nurses know which ones who were angels to her. Please share your memories of Ruby on her on-line guest register at www.vanderwallfh.com. The family is being served by the Vanderwall Funeral Home in Dayton where they will receive friends Wednesday after 11:00 a.m.

Ruby L. Revis, age 87, of Dayton received the ultimate Christmas gift on Christmas Eve evening. The angels in heaven swooped down and carried her away to her Lord and Savior Jesus Christ. What a homecoming she was given by her loved ones there.... View Obituary & Service Information

The family of Ruby L. Revis created this Life Tributes page to make it easy to share your memories.

Send flowers to the Revis family.