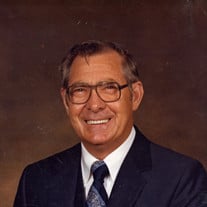 Rev. Robert “Bob” Lands, 85, left this world on August 28, 2014 peacefully at home by the side of his loving care giver and wife of 64 years. He passed in his sleep and woke up in the arms of Jesus. Rev. Lands served his country with the U.S. Navy during the Korean War. He was saved in 1958 and committed from that day to answer the call God put on his life. His first ministerial assignment was at Wesleyan Methodist Church (Crossville, TN). He went on to found Wesleyan Christian School (Chattanooga, TN) where he served as an administrator for 20+ years. He also served as the Pastor of Temple Bible Methodist Church (Chattanooga, TN) for 25 years. Based on his passion for lost souls and commitment to his call to the ministry, he answered God’s call to establish what he called “The Old Country Church” in Dayton, TN where he faithfully served as Pastor of the flock God sent to him until his diagnosis of Alzheimer’s disease in 2004. Many members of his church came from the jail services he held in Rhea County. His faithfulness to God’s call led countless souls to Christ throughout his life. He was preceded in death by siblings Oma Long, Helen Brandon, Mary Pelfrey, Clifford Lands, Earn Lands, Luke Lands, Herbert Lands, and George Lands. Rev. Lands is survived by his wife of 64 years, Kathleen Gilliam Lands (Dayton, TN); daughter, Linda (David) Hudson (Ooltewah, TN); son Roy (Renee) Lands (Rossville, GA); Grandchildren, David (Ginger) Hudson (Flintstone, GA); Jason (Erica) Hudson (Ringgold, GA); Kelly (Michael) Shields (Rossville, GA); great-grandchildren, Cori, Alivia, Trey, Brianna, and Brody Hudson; Matthew and Savannah Shields; sister Betty O’Dell (Rockwood, TN). Rev. Lands to most; Husband to his one true love, Daddy to his precious children, Pawpaw to his beloved grandchildren, Brother to his many siblings, Friend to all that knew him, and most importantly a Child of the King . He was a kind loving man who touched everyone he met. I don’t know if he ever met a stranger he didn’t ask, “Do you know Jesus?” He loved deep and faithfully lived out the Great Commission more than anyone I’ve ever known this side of heaven. On August 28th, 2014 he entered heaven and was able to say these words from 2 Timothy 4:7 with full confidence “I have fought the good fight, I have finished the race, I have kept the faith.” If he met you today, the first thing he would say is “Do you know Jesus?” and then proceed to tell you what Jesus did for him in 1958 when he gave his life to God and never looked back. Loved and missed dearly. We will see you in the morning! Funeral services with military honors for Rev. Lands will be held Sunday afternoon at 2:00pm in the funeral home chapel with Rev. Richard Miles officiating. He will be laid to rest in the Oak Grove Cemetery in Rockwood Sunday afternoon at 3:45pm. Please share your memories of Rev. Lands on his online guest register at www.vanderwallfh.com. The family is being served by the Vanderwall Funeral Home in Dayton where they will receive friends Sunday after 12 noon.

The family of Rev. Robert Lands created this Life Tributes page to make it easy to share your memories.

Send flowers to the Lands family.