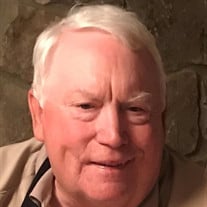 Ray Wooten Griffin, Jr., 76, died early Friday, May 7, 2021, at his river home in Dayton, Tennessee from complications of congestive heart disease. He was affectionately known as Skip and was fond of saying, “Call me Skip. Call me Skipper. But never ever call me Skippy.” With his bright brown eyes twinkling, he would tell countless jokes, with snappy, off-the-cuff punch-lines. Skip won final Jeopardy almost every night and composed delightful and delicious meals for his family and friends. With Skip, every holiday was a lively party with an abundance of food and drink. Skip possessed limitless talents. His mind was keen and quick, serving him well at Robinson Manufacturing, where he participated in the massive growth of the company’s domestic and international sales. He had an adventuresome and fearless nature, and his myriad interests were all passionate. He never dabbled. He loved to bird hunt and took great pleasure in training Labrador Retrievers, from an early champ named Willy to his present dog, Clyde. He was a crackerjack shot in the day, an accomplished horseman, a fine golfer and an enthusiastic boater. He was also a connoisseur of Jack Daniels, preferably on the rocks, and was fond of claiming his unofficial induction into Jack Daniels’ Hall of Fame. An ardent reader, he would devour a book in a day and still be current with all sports stats. A faithful Christian, Skip reveled in the Word of the Lord. He was a member of First Methodist Church of Dayton and served his community as a commissioner of Rhea Elections. Born in Kinston, North Carolina to the late Ray and Dorothy Brothers Griffin, Skip and his family moved to Chattanooga in 1960 where his father continued his career in the textile industry with Dixie Yarns. Skip graduated from Brainerd High School class of ’63, where he made dozens of close friends who hold class gatherings almost every year. In fact, they were such grand friends that in addition to several mountain getaways, they once took a two-week Alaskan cruise. He attended The University of North Carolina at Chapel Hill and graduated from The University of Chattanooga. Skip was proud to have served as a U.S. Marine. Skip is survived by his beloved wife of 39 years, Katherine Robinson Griffin of Dayton; his daughter and husband, Matilda Griffin Patton and Clay of Montlake Mountain; his son and wife, Ray Griffin and Nini of Signal Mountain; his sister, Nancy Dozier and husband Larry of Greenwood, SC; his brother Sam Griffin and wife Kay of Albemarle, NC; grandchildren Will Patton and wife Breanna, Mac Patton, Jack Patton and Charlie Griffin and Skip’s Aunt Bess Brothers Detrick of Waco, TX and father-in-law, William E. Robinson of Dayton as well as cherished nieces and nephews. The service will be Saturday, May 22, 2021 at 11:00 at First Methodist Church, Dayton with Reverend Layne Pennington officiating. A reception following the service will be at the Griffin home in Dayton. Memorial contributions may be made to First Methodist Church, 993 Market Street, Dayton, TN 37321 or Rhea County Community Center, 232 4th Avenue, Dayton, TN 37321 or Tennessee Wildlife Federation, 300 Orlando Avenue, Nashville, TN 37209. You may livestream the service at youtube.com/Skip Griffin Funeral, and share your memories at www.VanderwallFH.com. The family is being cared for by Vanderwall Funeral Home in Dayton, TN.

Ray Wooten Griffin, Jr., 76, died early Friday, May 7, 2021, at his river home in Dayton, Tennessee from complications of congestive heart disease. He was affectionately known as Skip and was fond of saying, &#8220;Call me Skip. Call me Skipper.... View Obituary & Service Information

The family of Skip Griffin created this Life Tributes page to make it easy to share your memories.

Send flowers to the Griffin family.