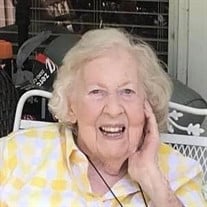 Peggy Jane Kellett Briscoe, age 95 of Dayton, passed away early morning December 7, 2020 at Parkridge Medical Center in Chattanooga. She was born on May 12, 1925 in Denver, CO, the daughter of the late Earl Lewis Kellett and Martha Ellen (Catron) Kellett. Peggy was raised in West Plains, MO and a graduate of West Plains High School. She married as a war-bride, to her high school sweetheart, Richard Whitelaw Briscoe on November 14, 1942. They married for 67 wonderful years, lived and raised their girls for 28 years in West Plains, MO before moving to Jackson, MS and retiring to TN. Peggy was a member of the First Presbyterian Church in West Plains, MO. She is survived by her daughters, Barbara “Bunny” Briscoe (James) Gordon of Mt. Juliet, TN, Constance “Connie” Briscoe (Howard) Cox of Anderson, SC, Jeanette “Nettie” Briscoe (David) Dantice of Bostwick, GA, Patricia “Patti” Briscoe (Garner) Russell of Pass Christian, MS and Peggy “Whit” Briscoe Matthews of Dayton, TN; 16 grandchildren; 47 great-grand children; two great-great-grandchildren; her life long best friend and cousin, Jeanette Grisham of West Plains, MO; and countless friends, in fact, there are 90 members of Mom’s extended legacy. Peggy was a career homemaker and the glue of her extensive family where every member believes they are her favorite and where the term “love you mostest and bestest”, will forever be a treasured family endearment coined by our beloved “Mom”. Graveside Funeral Service for Peggy will be held Saturday morning, December 12, 2020 at 10:00 a.m. at Oak Lawn Cemetery in West Plains, MO. Please share your memories and photos of Peggy on her online guest register at www.vanderwallfh.com. The family is being cared for by the Vanderwall Funeral Home in Dayton, TN.

Peggy Jane Kellett Briscoe, age 95 of Dayton, passed away early morning December 7, 2020 at Parkridge Medical Center in Chattanooga. She was born on May 12, 1925 in Denver, CO, the daughter of the late Earl Lewis Kellett and Martha Ellen (Catron)... View Obituary & Service Information

The family of Peggy Jane Kellett Briscoe created this Life Tributes page to make it easy to share your memories.

Send flowers to the Briscoe family.