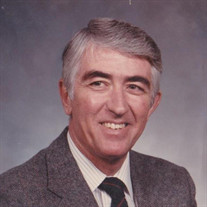 Paul Andrew Marsteller August 31, 1932 - January 23, 2019 Paul Andrew Marsteller age 87 of Dayton, TN went to be with his Saviour Jesus Christ early Wednesday morning, January 23, 2019. He was born in Youngstown, Ohio on August 31, 1932, the middle child of Rev. Andrew Marsteller and his wife Gail (Way) Marsteller. Upon graduation from high school Paul went to Bryan College (to start his preparation to become a missionary pilot) where he met Mary Wiggans. After Paul’s graduation in 1954 the two were married and started on the first phase of their journey together, in their preparation for the mission field. They then loaded their possessions in their ’36 Plymouth and traveled to Los Angeles, California for the next part of their journey. While Paul attended LA Trade Tech (Airframe & Powerplant), both of them worked at Hughes Tool and Die. After Paul’s graduation they moved on to the next step in their preparation for the mission field, that was Linguistics training at the University of North Dakota. They returned to Youngstown for the birth of their son Philip in October of 1956 and 5 months later left the U.S. for the first (of many) times. They were headed to southern Mexico for “Jungle Camp”. Upon completion of Wycliffe Bible Translators jungle training they traveled to Lima Peru for language study and then on to the Wycliffe base deep in the heart of the Peruvian Amazon. There Paul started his work for JAARS (the aviation arm of Wycliffe). In December of 1958 their son Mark was born. Paul was later transferred to the base in Bolivia. Upon completion of their first assignment the Marstellers returned to the US for a year of deputation and for Paul to complete his flight training. In November of 1963 the Marstellers traveled to Rio de Janeiro Brazil for language training. After completion of language training Paul started his assignment as pilot of the JAARS Norden Norseman float plane (based in Manaus Brazil) supporting the Wycliffe missionaries in the Brazilian Amazon. It was there in November 1965 that he was asked to take Senator Robert Kennedy into an Indian tribe. So Paul took the Senator into the Hixcariana tribe where they spent the night. During his time with Wycliffe in Brazil Paul opened the base in Porto Velho and later moved to Belem after turning over the work there to two new pilots. In 1974 Paul was asked to assume a leadership role at the Jari Project in the NE Amazon so he took a leave of absence from Wycliffe. In 1981 Paul was responsible for negotiating the sale of the project to a Brazilian consortium. Paul and Mary then returned to the US. In 1985 Paul’s son Philip asked him to join him at his fledgling international sales company. Paul and Mary then moved from Arizona to the DFW area. In 2011 Paul and Mary decided to move to Dayton Tennessee and enjoy their retirement on Dayton Mountain. Paul is survived by his his wife Mary, his brother Reverend David Marsteller of Lakeland, Florida, his son Philip Marsteller and wife Ruth of Pikeville, TN, his son Mark Marsteller and wife Valerie of New Bern, NC, grandson Justin Marsteller of Phoenix AZ, grandson Andrew Marsteller and wife Lisa from Saline MI, grandson Simon Marsteller of Grapevine TX, grandson Trevor Marsteller and wife Brittani of Chicago, IL, grandson Philip Marsteller Jr. of Dayton TN, granddaughter Rebecca Marsteller of New York City, NY, granddaughter Steffani Hayes and husband Derin of Lighthouse Point, FL, granddaughter Heather English and husband Jonathan of Durant OK, grandson Brandon Marsteller of New Bern NC, granddaughter Lesley Marsteller of New Bern NC, great granddaughters Ella and Ashlyn Marsteller of Saline MI, great granddaughter Abby Marsteller of Chicago IL, great grandsons Jonathan, Nathaniel and Gabriel English and great-granddaughters Mary Grace and Adoniah Elizabeth English all of Durant, Oklahoma. A Celebration of Life Service for Paul will be held at Grace Bible Church in Dayton on Saturday at 3:00 p.m. with Reverend David Hobbs officiating. Paul was laid to rest in Rhea Memory Gardens in Dayton. Please share your memories of Paul on his online guest register at www.vanderwallfh.com. Memorial contributions may be made to Grace Bible Church in Dayton, TN. The family is being cared for by the Vanderwall Funeral Home.

The family of Paul Andrew Marsteller created this Life Tributes page to make it easy to share your memories.

Send flowers to the Marsteller family.