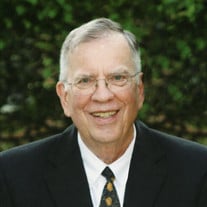 Paul Harold Ardelean, Jr. of Dayton, Tennessee went home to be with his Lord and Savior on February 20, 2019. Paul was born in Detroit Michigan on October 19, 1933 to Paul Ardelean and Laurel Lawrence Ardelean. He grew up in Wayne, Michigan and attended Bryan College for two years before graduating from the University of Michigan. In January, 1957, he married Jane Ann Brown and they moved to Hawaii for two years where Paul served with the United States Navy before returning to Michigan. In 1968, they moved to Brazil where they were missionaries with Wycliffe Bible Translators and then with the American School of Brasilia, where Paul was the headmaster. He also was a dean and alumni director at Bryan College before retiring. Following Jane’s death in 2012, Paul married Wanda June (Winnie) Davey in 2013 and was happily married until his death. Visitation with the family will be held on March 1st from 4-8 p.m. at Vanderwall Funeral Home and a memorial service will be held at Grace Bible Church on March 2nd at 2:00 p.m. with Rev. David Hobbs and Rev. Phil Evaul officiating. Paul will be laid to rest in the Chattanooga National Cemetery. Paul is survived by his loving wife, Winnie, of Dayton, Tennessee; his children, Janet Schmidt and her husband, David, of Houston, Texas; Martha Weygandt and her husband, Doug, of Columbus, Ohio; and Greg Ardelean and his wife, Jeannine, of Orlando, Florida; grandchildren Brooks Weygandt, Bennett Ardelean, Seth Weygandt, Lauren Weygandt, Macy Schmidt, and Baylie Ardelean. Siblings: Shirley Fehl (Larry), Ruth Ronish (Roland), Dave Ardelean (Kathy), and the late Lois Ardelean. Please share your memories of Paul on his online guest register at www.vanderwallfh.com. Memorial gifts may be made to Grace Bible Church, 2809 Old Washington Hwy, Dayton, TN 37321 or Wycliffe Bible Translators, 11211 John Wycliffe Boulevard, Orlando, FL 32832 or Bryan College, 721 Bryan Drive, Dayton, TN 37321.

Paul Harold Ardelean, Jr. of Dayton, Tennessee went home to be with his Lord and Savior on February 20, 2019. Paul was born in Detroit Michigan on October 19, 1933 to Paul Ardelean and Laurel Lawrence Ardelean. He grew up in Wayne, Michigan... View Obituary & Service Information

The family of Paul Harold Ardelean created this Life Tributes page to make it easy to share your memories.

Send flowers to the Ardelean family.