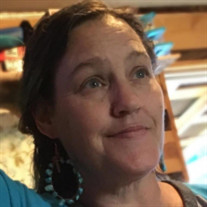 Patricia “Tish” Ann Dorn, age 50 of Sale Creek, passed away on Tuesday, October 19, 2021, at her home. She was born on March 20, 1971, in Tacoma, WA, the daughter of the late Orville Mason Nolting and Dollie Jenay (Gross) Dent. She was also preceded in death by her infant twins; her nephew, Gary “Hoss” Dent; and her step-father, Terry A. Dent. Tish was a homemaker and seamstress, and she enjoyed collecting rocks, gardening, fishing, and drinking coffee. Tish is survived by her husband of 30 years, Ed Dorn II; daughter, Rebecca Nolting; son, Ed Dorn III; and two grandsons, Wyatt Buchanan and Spencer Buchanan, all of Sale Creek. She is also survived by her sister, Regeneia (Scott) Duffey of Soddy Daisy; two nieces, Erika Friddell and Gracie Dent; and her nephew, James Boles II. Services for Tish will be announced at a later date. Please share your memories and photos of Tish on her online guest register at www.vanderwallfh.com. The family is being cared for by Vanderwall Funeral Home in Dayton, TN.

The family of Tish Dorn created this Life Tributes page to make it easy to share your memories.

Send flowers to the Dorn family.