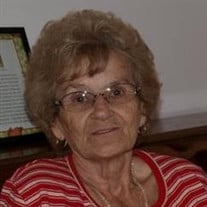 Ruth Swafford Dayton Nettie Ruth Swafford, age 81 of Dayton, passed away Tuesday January 27, 2015. She was born on Evensville Mtn. on April 19, 1933 to the late Alfred Harris and Nellie (Pelfrey) Harris. She was also preceded in death by her... View Obituary & Service Information

The family of Nettie Ruth Swafford created this Life Tributes page to make it easy to share your memories.

Send flowers to the Swafford family.