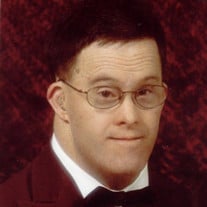 Michael Jon “Mike” Austin, age 63 of Dayton, passed away early on Friday morning, April 29, 2022, at his home. He was born in Shell Pastaza, Ecuador, on January 13, 1959, the son of missionary parents, the late Keith and Doris (Aspin) Austin. Mike lived in Ecuador from his birth until 1969, lived in Miami, FL, from 1969 to 1990, and lived in Dayton since 1990. He attended Alliance Academy in Quito, Ecuador, was a Rhea of Sunshine client, and worked at Pizza Hut in Dayton. He was a member of Westminster Presbyterian Church in Dayton. He is survived by his brother, David (Jane) Austin of Dayton; his two sisters, Judith Austin of Dayton and Carol (Bob) Snell of Magnolia, TX; and his nieces and nephews. Funeral services for Mike will be held at Westminster Presbyterian Church on Sunday, May 1, 2022, at 4:00 p.m. with Rev. Carter Johnson and Rev. Dennis Johnson officiating. Mike will lie in state at the church one hour before the service. He will be laid to rest next to his mother in the Westminster Presbyterian Church Cemetery. Memorial contributions may be given in Mike’s name to Westminster Presbyterian Church, 1161 Hiwassee Hwy., Dayton, TN 37321. Please share your memories and photos of Mike on his online guest register at www.vanderwallfh.com. The family is being cared for by Vanderwall Funeral Home in Dayton, TN.

The family of Michael Jon "Mike" Austin created this Life Tributes page to make it easy to share your memories.

Send flowers to the Austin family.