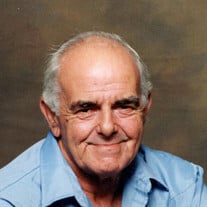 Lester Woodall, Jr. Poplarville, MS Lester Woodall, Jr. age 78 of Poplarville, MS, died Sunday, February 22, 2015 in his home. He was born in Chattanooga, TN July 23, 1936 to the late Lester Woodall, Sr. and Mary (Bowman) Woodall, and he was also preceded in death by his wife, Wilma (McKinney) Woodall. Lester joined the Army after leaving high school, moved to Poplarville in 1974, and went on to become a dredge boat operator. He was a member of Bethel Baptist Church in Poplarville, MS. Lester is survived by three sons, Samuel (Wanda) Woodall of Poplarville,MS , Russell ( Wanda) Woodall of Stoney Point,NC , Larry (Beverly) Woodall of Decatur,TN, two daughters , Sharon (Terry) Snyder of Sevierville,TN , Leslie Woodall of Bogalusa,LA , nine grand children and seven great- grand children. Funeral services for Lester will be held Thursday at 12:00 noon in the chapel of Vanderwall Funeral Home with Rev. John Fields officiating. He will be laid to rest with military honors next to his wife at Oak Grove Cemetery in Rockwood, TN. Please share your memories of Lester on his online guest register at www.vanderwallfh.com . The family is being served by Vanderwall Funeral Home where they will receive friends Wednesday from 4:00 p.m. until 7:00 p.m.

The family of Lester Woodall Jr. created this Life Tributes page to make it easy to share your memories.

Send flowers to the Woodall family.