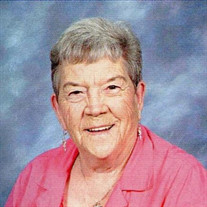 Katie Lee Watson age 92 of Madisonville, TN and formerly of Dade City, FL died Friday, April 3, 2020 in Sweetwater, TN. Katie was born on June 10, 1927 in Clinch County, GA the daughter of the late Paul Colson Sikes and Katie Ruth (Allen) Sikes. She was also preceded in death by her husband John Osburne Watson, sister, Rema Hall and her three brothers, Paul Sikes, Jr., Charles Sikes and Tommy Sikes. Katie was a longtime resident of Dade City, FL until moving to Madisonville, TN in 2016. Katie retired from civil service at Robbins AFB in Warner Robbins, GA where she worked in the photography lab for many years. While living in Dade City, FL she was a member of the Richland Baptist Church and in Madisonville, TN she was a member of the Journey of Faith Fellowship Church. She is survived by her daughter, Carolyn (Donald) Lee of Madisonville, TN; two grandsons, Donald Joseph Lee and Jeffrey Duane Lee; great-grandsons, Donald Joseph Lee, Jr., Dalton Jacob Lee, Joshua Carlton Lee and Matthew Donald Lee; and her great-great-grandsons, Donald Joseph Lee, III and Cullen Barrett Lee. Graveside services for Katie will be held at a later date where she will be laid to rest next to her husband in Chapel Hills Gardens in Dade City, FL. Please share your memories of Katie on her online guest register at www.vanderwallfh.com. The family is being cared for by the Vanderwall Funeral Home in Dayton, TN.

The family of Katie Lee Watson created this Life Tributes page to make it easy to share your memories.

Send flowers to the Watson family.