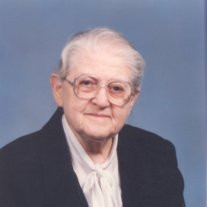 Joyce Irene de Rosset, age 98, died Wednesday, March 6, 2013 at the Courtyard in Dayton. She was born February 19, 1915 in Hesperia, MI to the late Norman and Esther (Sprunger) Hirschy. She was also preceded in death by her husband Edward Meares de Rosset and her brother Harlan Hirschy. She enrolled in the nursing program at Berea College, Berea, KY and later transferred to Bryan College in Dayton, TN where she earned a Bachelor’s in English. She also attended Grace College in Winona Lake, IN, Philadelphia College of the Bible, Moody Bible Institute, Slippery Rock State Teacher’s College and Geneva College in PA. Joyce lived in Peru from 1944 to 1986 where she and her husband were missionaries. She lived in Evans City, PA from 1986 until 2005, before moving to Dayton. She was a member of the First Baptist Church of Evans City, PA and then the Sale Creek Independent Presbyterian Church. She is survived by her two daughters Karin (Dr. Jack) Traylor of Dayton and Rosalie de Rosset of Chicago, two sons Edward (Lou Ann) de Rosset of Corbin, KY and Frederick (Carol) de Rosset of Berea, KY, two sisters Lois Langdon of Grand Rapids, MI, and Kathryn Hoyt of Winona Lake, IN, two brothers Daniel Hirschy of Waterville, ME and Philip (Fae) Hirschy of Evans City, PA and two granddaughters Rachel de Rosset of Berea, KY and Chloe Rose de Rosset of Corbin, KY. Funeral services for Joyce will be held Monday at 2:00 p.m. at Sale Creek Independent Presbyterian Church with Pastor Phil Evaul officiating. She will be laid to rest next to her husband at the Evans City Cemetery in Evans City, PA. Please share your memories of Joyce on her on-line guest register at www.vanderwallfh.com. In lieu of flowers, the family requests that memorial contributions be made to Baptist Mid-Missions, P.O. Box 308011, Cleveland, OH 44130-8011. The family is being served by the Vanderwall Funeral Home in Dayton.

Joyce Irene de Rosset, age 98, died Wednesday, March 6, 2013 at the Courtyard in Dayton. She was born February 19, 1915 in Hesperia, MI to the late Norman and Esther (Sprunger) Hirschy. She was also preceded in death by her husband Edward... View Obituary & Service Information

The family of Joyce Irene de Rosset created this Life Tributes page to make it easy to share your memories.