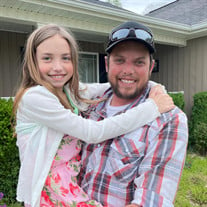 Joseph Colie “Joe” Brown, age 34 of Dayton, passed away on Wednesday, April 20, 2022, in Cheatham County, Tennessee. He was born on October 21, 1987, in Atlanta, GA. He was preceded in death by his father, David Michael Brown and his father-in-law, Ray Patton. Joe moved to Dayton in 2004 after living in Stonebridge, GA, and was a graduate of Rhea County High School Class of 2006. He was employed by TVA as a helicopter lineman after completing a four-year TVA lineman apprenticeship and was a member of IBEW Local 175. He enjoyed hunting, fishing, golf, spending time on the lake, and spending time with his family. He attended Lake Drive Baptist Church in Sale Creek, TN. Joe is survived by his wife of ten years, Jessica Deann (Patton) Brown of Dayton; his daughter, Rylee Jo Brown at home; his mother, Janice (Jackson) Brown of Dayton, his sister, Rebecca (Kyle) Hall of Dayton; his mother-in-law, Julia Patton of Evensville; his grandmother, Emily P. Jackson of Dayton; his brother and sister-in-law, Cody and Leann Smith of Dayton; his brother-in-law, Jason Patton of Evensville; and his nieces and nephews, Kennedy Smith, Liberty Smith, Jackson Smith, Johnathan Hall, and Lincoln Smith. Funeral services for Joe will be held in the funeral home chapel on Saturday, April 23, 2022, at 1:00 p.m. with his friends Marcus Schubert, Cody Smith, and Zack Sibert officiating. He will be laid to rest at Spence Cemetery in Dayton with Rev. David Haynes of Lake Drive Baptist Church officiating. Please share your memories and photos of Joe on his online guest register at www.vanderwallfh.com. The family is being cared for by Vanderwall Funeral Home in Dayton, TN, where they will receive friends Saturday, April 23, 2022, after 11:00 a.m. until the time of the service.

The family of Joseph Colie "Joe" Brown created this Life Tributes page to make it easy to share your memories.

Send flowers to the Brown family.