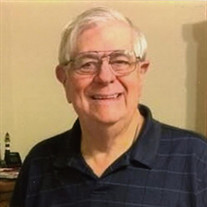 John David Martin, age 80 of Spring City, passed away Thursday morning, February 4, 2021 at Roane Medical Center. He was born on October 2, 1940 in Harlan, KY, the son of the late Hermas and Norma (Shanklin) Martin. John was also preceded in death by his wife, Helen Martin, his children, John David Martin Jr. and Debbie Martin, and his brother, Gerald Martin. John spent most of his life in Marietta, GA before moving to Spring City where he has lived the past 20 years. He graduated from Fulton High School in Knoxville. John was honorably discharged from the US Air Force in 1964 serving during Cold War, honorably discharged as a Master Sergeant from Georgia Air National Guard in 1981, retired as Master Sergeant from US Air Force Reserve in 2000, served as a pilot and retired as Lt. Col. from TN Civil Air Patrol from 1984 to 2004. He was employed at Lockheed Georgia Co. from 1963 to 1996. John attended the Wolf Creek Baptist Church. He is survived by his wife, Gladys Christine (Smith) Martin of Spring City; children, Mike (Cindy) Martin of Cartersville, GA, Connie Wheeler of Abilene, TX, Joe (Annette) Durham of Spring City, Leonard (Kristi) Durham of Wharton, TX and Janet (Mark) May of Murphy, NC; grandchildren, Kevin Hall of Dayton, Brandi (Lyn) Miller of Spring City, Joey (Shelby) Durham of Friendsville, TN, Kimberly (Rance) Harden of Kingsport, TN, Keyla (Kevin) Dotson of Dayton and Lauren (Wade) Horton of Ooltewah, TN. Funeral services for John will be held Sunday afternoon, February 7, 2021 at 2:00pm in the funeral home chapel with Pastor Paul Forgey officiating. He will be laid to rest in the Reed Cemetery in Grandview Mountain with US Air Force honors. Pallbearers, Joe Durham, Leonard Durham, Joey Durham, Lyn Miller, Rance Harden and Kevin Dotson and honorary pallbearer, Mike Martin. Please share your memories and photos of John on his online guest register at www.vanderwallfh.com. The family is being cared for by the Vanderwall Funeral Home in Dayton where they will receive friends Sunday at 12:00 noon. Masks will be required and social distancing is strongly encouraged.

The family of John David Martin created this Life Tributes page to make it easy to share your memories.

Send flowers to the Martin family.