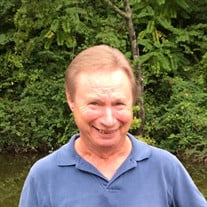 John Robert Clark, age 71, of Dayton Mountain died Wednesday, May 30, 2018 at Erlanger Hospital in Chattanooga. He was born January 4, 1947 in Dayton to the late Lealon Clark and Hazel (Milligan) Clark. He was also preceded in death by his infant sister Helen Clark. John had been a resident of Dayton all of his life. He was a graduate of Rhea Central High School class of 1965. John was a lab technician for Dupont for 38 years and retired in March 31, 2013. He enjoyed hunting, fishing and gardening. John was passionate about music, Nascar and family. John was of the Church of God faith. He is survived by his wife Darlene “Sue” (Rogers) Clark; four children Greggory (Melissa) Clark of Dayton, Timothy (Amy) Clark of Lebanon, OH, Kathy (Randy) Hudson of Brayton Mountain and Michael (Wendy) Lawson of Dayton; his three sisters Katherine (Ray) Thompson of Decatur, AL, Nancy Hood of Sale Creek and Rose (Dave) Howard of Hixson; his grandchildren Ashleigh Clark, Nick Clark, Bradley Clark, Caleb Clark, Pearl Clark, Miranda Lynch, Aaron Yeargan, Lacy Looney, Christy Chalou, C J Lynch, Bradley Hudson and Jacob Lawson; his great-grandchild Hunter Clark and eight additional great-grandchildren that all loved their “Pop” John. Funeral services for John will be held Saturday at 12:00 noon in the funeral home chapel with Rev. Mike Patton officiating. He will be laid to rest in Rhea Memory Gardens Cemetery in Dayton. Please share your memories of John on his online guest register at www.vanderwallfh.com . The family is being cared for by the Vanderwall Funeral Home in Dayton where they will receive family and friends Saturday after 10:00 a.m.

John Robert Clark, age 71, of Dayton Mountain died Wednesday, May 30, 2018 at Erlanger Hospital in Chattanooga. He was born January 4, 1947 in Dayton to the late Lealon Clark and Hazel (Milligan) Clark. He was also preceded in death by his... View Obituary & Service Information

The family of John Robert Clark created this Life Tributes page to make it easy to share your memories.

Send flowers to the Clark family.