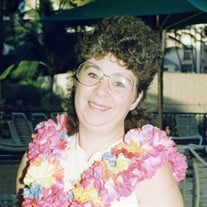 Joan Vansittert Evensville Joan Frances (Dotson) Vansittert, age 71, died Wednesday evening, December 19, 2018 at her home in Evensville. She was born on June 15, 1947 in Evensville to the late Clyde Dotson Sr. and Louise (King) Pelfrey. She was also preceded in death by her husband, Joseph Vansittert, her stepfather, who raised her, Clay Pelfrey, sisters Linda Sutton and Judy Watson and brother Johnny Pelfrey. She was raised in Evensville, lived in Spokane, WA, Battle Creek, MI, Hollywood, FL, Ellicott, MD, Salina, KS, Kansas City, KS and returned to Evensville in 2015. Joan was a homemaker, a mother, a former owner of many restaurants and clubs, a city councilwoman in Maryville, KS and her most recent and most enjoyable job was of a grandmother and great-grandmother. She is survived by her companion and best friend, Frank Edward Williams II of Salina, KS; her daughters, Dorothy Young of Missouri, Tammy Benton and Rebecca Arlene Kiest both of Dayton, and Emily Lee of Michigan; her sons, Paul King and Ron Whitmire both of Florida, Timothy Barnes of Simpsonville, SC; 24 grandchildren and many great-grandchildren; her sisters, Vivian McNabb of Chattanooga, Vera Henderson of Florida, Marilyn Payne of Grimsly, TN, Tressa Lockhart and Evelyn McAllister both of Battle Creek, MI; her brothers, Bobby Joe Dotson of Battle Creek, MI, Clyde Dotson, Jr., Jeff Dotson both of Athens, MI and David Pelfrey of Old Washington. Please share your memories of Joan on her online guest register at www.vanderwallfh.com. The family is being cared for by the Vanderwall Funeral Home in Dayton where they will receive family and friends Saturday afternoon from 1:00 p.m. until 4:00 p.m.

The family of Joan Frances Vansittert created this Life Tributes page to make it easy to share your memories.

Send flowers to the Vansittert family.