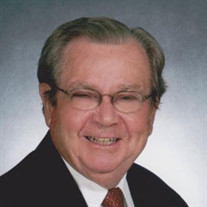 James Willard “Jim” Doty, 95, a World War II combat veteran who served on the Dayton Planning Commission for 20 years, passed away on Thursday, January 14, 2021, at Life Care Center in Dayton. He was born on May 22, 1925 along the L&N railroad tracks between the Tennessee and Big Sandy rivers in Big Sandy, TN, to Wes and Lucille Crawford Doty. For the next 12 Depression years he lived in his beloved rural Big Sandy not realizing they were poor while his mother worked as a substitute teacher and his father hauled fruit from Florida. Willard, as he was known in Big Sandy, contributed to the family’s income by picking up coal along the railroad tracks, catfishing with throwlines and set hooks in the river, and collecting and selling scrap metal, which unknown to him was sold to Japan and would be returned back at him during World War II. In 1937, much to his dismay, his father’s work required moving to Nashville, then Chattanooga and then back to Nashville over a 14-year period. In 1941, the family moved to rural Bruceton, TN, and he entered Hollow Rock/Bruceton Central High School. In 1943, before graduating, he took and passed the qualification test for the Army Air Corps cadet program. He was called to active duty two weeks later and trained in seven different locations, the last one overseas with his entire crew, as a bombardier and a ball turret gunner on a Mitchell B-24 heavy bomber. He was shipped out to the southwest Pacific where his crew was assigned to the 31th Squadron, 5th Bombardment Group of the 13th Air Force. After flying combat missions and then long patrol missions, which followed the dropping of the atomic bombs, he and his crew returned home in late 1945. Along with his brother, Ray, he enrolled at The University of Tennessee/Martin. After two years they both transferred to the University of Tennessee/Knoxville, graduating as mechanical engineers in 1950. Following short stints with a contractor in Memphis and helping construct the Gaseous Diffusion Plant in Paducah, KY, he spent the next 34 years with the Tennessee Valley Authority (TVA), including Knoxville Design, five fossil-fueled generating plants and three nuclear plants. He retired from Sequoyah Nuclear Plant after serving as mechanical maintenance supervisor, special projects manager and assistant plant manager/maintenance. He was a licensed professional engineer in the state of Tennessee and was active in the TVA Engineers Association, serving as valley-wide vice president. It was early in his career, in 1954, that he visited a dentist’s office in Camden, TN, for a checkup and met a beautiful little redhead, Billie Jean Sandefur, which resulted in a 66-year marriage. Over the years, Jim’s hobbies ranged from fishing and hunting to boat racing (two Kentucky state championships), gunsmithing, woodworking and years of working and golfing at Dayton Golf and Country Club. Other interests included Shriners, Lions Club and serving as treasurer of the 31st Bomb Squadron Association. He was baptized at Big Sandy Methodist Church in 1936 and remained active in church, especially First United Methodist Church in Dayton, until his health declined. Survivors include his wife, Billie, of Dayton; his supportive younger brother, Ray Doty (Betty), Loudon, TN; daughter, Tracy (Perry) Ward, Knoxville, and their children, Alex, and great-granddaughter Luci, Clinton, TN; Sam (Jasmine), Brooklyn, NY; Addie (Chris) Harrelson, and great-granddaughter Lily, St. Louis, MO; and Ben, St. Louis, MO; son, John Doty (Carol), Andersonville, TN, and their children, Dr. Wes Doty (Meg) and great-grandchildren Matthew and Arden of Charleston, SC; Wayne (Katie) Rader, Wichita, KS, and grandchildren, Courtney (Cameron) Sabol and Zachary Rader, Knoxville; Dustin (Amanda) Rader and grandchildren Hannah (Brady) Barnett, Cleveland, TN, Jackson Rader, Cleveland, TN, Annie, Millie and Molly Rader, Maryville, TN; a host of nieces and nephews, and numerous close friends in Dayton, including David and Lane Tullis, Bill and Mary Beth Moore, and Richard Daugherty. The family wishes to thank the administration and staff of Life Care/The Veranda in Dayton for their caring support provided to Jim during his stay. Vanderwall Funeral Home, Dayton, is in charge of arrangements. However, services will be delayed because of the COVID pandemic and will be announced at a later date. There will be a virtual memorial service posted on the Vanderwall homepage at https://www.vanderwallfh.com and on First Church of Dayton, TN Facebook page. In lieu of flowers, the family is asking for donations to First United Methodist Church, 993 Market St, Dayton, TN 37321.

The family of Jim Doty created this Life Tributes page to make it easy to share your memories.

Send flowers to the Doty family.