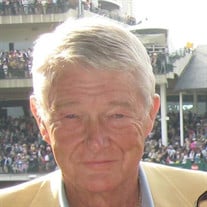 James Francis Dill, Sr, age 76 of Dayton died Saturday morning, November 19, 2016. James was born in Franklin, NC on February 10, 1940 to the late Jasper Newton Dill and Opal (Flood) Dill. James has been a resident of Dayton since 1973. James epitomized the American Dream. James lived and worked during his childhood with his parents and two siblings as tenant farmers in north Georgia and then grew up to be a very successful entrepreneur. He graduated from Warner Robbins High School in 1959 as a standout student athlete and he went on to play basketball in college. Shortly after beginning his professional career in finance, he became Vice President of Dayton Bank & Trust before founding his own company, Continental Car Club, in the mid 1970s. James and his wife of 54 years, Phyllis, met in high school, eloped, had two children and grew their company together before selling it in 2010. James’ dedication to providing for his family and supporting his community were reflected in his and his wife’s tireless hard work to make their company a success. James received many honors for business accomplishments and outstanding service to his community, state, and region. A few of his favorite included being commissioned as a Kentucky Colonel, a Tennessee Colonel, and being appointed a Lieutenant Colonel on the Georgia Governor’s staff. He also received recognition for devoted and distinguished service from the American Legion and was named Elk of the Year by the Grand Lodge Order of Elks for his works focused on children’s charities. James enjoyed going to horse races and casinos and was well known for winning many dollar bets around town on a handshake. He was a member of the Dayton First United Methodist Church. He is survived by his wife, Phyllis (Patterson) Dill of Dayton, his son, James F. (Jennifer) Dill, Jr. of Dayton, his daughter, Deena (Dr. Rob) Kosciusko of Columbia, SC. He is also survived by his six grandchildren, Elizabeth Dill, Abigail (fiancee’ Wes Rae) Dill, James F. Dill, III, Matthew Dill, Wyatt Kosciusko and Mia Kosciusko. Funeral services for James will be held Tuesday evening at 7:00pm in the funeral home chapel with Rev. Kenneth Pierce officiating. He will be laid to rest next to his parents in Rhea Memory Gardens. Please share your memories of James on his online guest register at www.vanderwallfh.com. The family is being served by the Vanderwall Funeral Home where they will receive friends Tuesday after 3:00pm. Memorial contributions may be made to the Salvation Army in his memory.

The family of James Francis Dill Sr. created this Life Tributes page to make it easy to share your memories.

Send flowers to the Dill family.