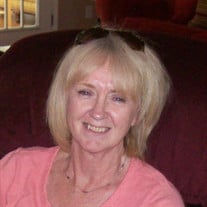 Jackie Cruse Dayton Jacquelyn “Jackie” Sue Cruse, age 67 of Dayton, passed away at her home Sunday, April 2, 2017. She was born in Ypsilanti, MI on July 19, 1949 to the late Jack and Viola (Batteau) Hopkins. Jackie grew up in Garden City, MI, and lived in Redford, MI until moving to Dayton in 2015. She attended West Senior High School and graduated with the class of 1967. Jackie worked as a registered nurse at Providence Hospital in Southfield, MI before retiring in 2012. Jackie was the WMU Director for many years at Merriman Road Baptist Church in Garden City, and taught Girls in Action, as well as Sunday School at her church. When she moved to Dayton, she became the co-leader of the Primetimer group at Garrison Baptist Church. Jackie is survived by her husband of 47 years, Larry Cruse of Dayton, in addition to her daughter, Jalena (Michael “Aaron”) Howard of Dayton, and her son, Jeffrey (Kim) Cruse of the Philippines. She is also survived by her brothers, James Hopkins of MI, and Gerald Hopkins of FL, in addition to her sister, Joann (Eric) Seaberg of MI. She is also survived by her grandson, Zander Howard of Dayton, in addition to many nieces, nephews, great nieces and nephews, and many cousins. A funeral service for Jackie will be held on Wednesday at 7:00pm in the funeral home chapel with Bro. Mike Breeden of Garrison Baptist Church officiating. She will be laid to rest at the Chattanooga National Cemetery. Memorial contributions in Jackie’s honor may be made to Garrison Baptist Church towards the Annie Armstrong or Lottie Moon offering (North American & International Missions). They may also be made to the Women’s Care Center in Dayton. Please share your memories of Jackie in her online guest register at www.vanderwallfh.com. The family is being cared for by Vanderwall Funeral Home where they will receive friends Wednesday at 4:00pm to 7:00pm.

The family of Jacquelyn (Jackie) Sue Cruse created this Life Tributes page to make it easy to share your memories.

Send flowers to the Cruse family.