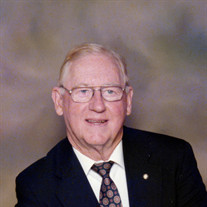 Howard Taylor Dayton Howard LeRoy Taylor, age 93 of Dayton, passed away Tuesday, February 14, 2017. He was born in Bruceton, TN on January 24, 1924 to the late Howard Green and Harriet (Bryant) Taylor. Howard was a man of many passions. After serving his country during World War II as an army medic at the 297th General Hospital in Europe, Howard went on to earn his Bachelors of Science from the University of Tennessee Knoxville, as well as a Master’s degree from Vanderbilt University. Howard was employed as a teacher of science, physics and chemistry, and later went on to become an education supervisor, as well as the principal and superintendent of Rhea Central and Rhea county schools. In his spare time, Howard enjoyed quail hunting and fishing, and also served with the Dayton Rotary Club for over 40 years. He served as President from 1977-1978 before becoming the Club Secretary for 23 years. After that he became a Paul Harris Fellow in 1992. Howard earned “Rotarian of the Year” twice because of his leadership, and he set the standard and record for over 30 years of perfect attendance. Howard also helped establish many of the policies, practices and procedures that the Dayton Rotary Club adheres to today. Howard was a longtime member of the First United Methodist Church in Dayton, having been a member since 1953. He was the church Sunday school secretary for over 33 years, in addition to serving on numerous church boards. He served wherever there was a need. Howard is survived by his loving wife of 63 years, Edwina (Pierce) Taylor of Dayton, in addition to his two sons, Howard Kimball (Vicki) Taylor of Soddy Daisy, and Randall Pierce (Teresa) Taylor of Signal Mtn. Howard is also survived by his daughter, Jan (Tom) Phillips of Manchester; in addition to four grandchildren, Melina Taylor (Ben Miles) of Danville, KY, Brendan Taylor (Fiancée Katie Lynch) of Chattanooga, Catherine Phillips of Murfreesboro, and Amanda Phillips of Manchester. A funeral service with military honors for Howard will be held at 7:00pm on Thursday, February 16, 2017 in the funeral home chapel with Rev. Ken Pierce and Rev. Bill Ewing officiating. He will be laid to rest in Pierce Cemetery in Evensville with a graveside service on Friday, February 17, 2017 at 11:00am with Rev. Clyde Fitzgerald officiating. Please share your memories of Howard in his online guestbook at www.vanderwallfh.com. Memorial contributions in Howard’s memory may be made to the First United Methodist Church of Dayton, or to St. Jude’s Children Hospital. The Dayton Rotary Club will serve as honorary pall bearers. The family is being cared for by Vanderwall Funeral Home in Dayton where they will receive friends on Thursday, February 16, 2017 at 5:00pm.

Howard Taylor Dayton Howard LeRoy Taylor, age 93 of Dayton, passed away Tuesday, February 14, 2017. He was born in Bruceton, TN on January 24, 1924 to the late Howard Green and Harriet (Bryant) Taylor. Howard was a man of many passions.... View Obituary & Service Information

The family of Howard LeRoy Taylor created this Life Tributes page to make it easy to share your memories.

Send flowers to the Taylor family.