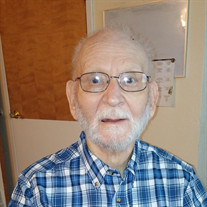 Rev. Howard Adin Tannahill, age 78 of Spring City, TN went to be with his Lord and Savior on January 21, 2015. He was born May 21, 1936 at home in Caney, KS, the son of the late Cyrus Adin and Rachel Louetta (McCreight) Tannahill. He was raised in a Christian home and came to know Jesus as his Savior as a young boy. He committed his life to full-time Christian service as a teenager while attending Marantha Bible Camp in Maxwell, NE. He faithfully served the Lord for 54 years at Cedine Bible Mission. He first ministered in school visitation and community ministries in 20 counties in middle Tennessee. He served as Camp Director for 33 years, Conference Director for 20 years and interim General Director for a year and a half. He was a faithful member of Christian Fellowship Church in Grandview, TN. He was a member of the IFCA, a member of the Christian Camp and Conference Association and served on the board of ANAM. He was preceded in death by his loving wife, Corrine Ann (Stirn) Tannahill and his granddaughter Krista Marie Johnson. He is survived by his four children, Rev. Vernon and Martha Tannahill of Spring City,TN, Vivian Johnson of Mansfield, TX, Valerie and Rev. Brent Harwerth of Fort Morgan, CO and Vera and Thomas Stalcup of Tingley, IA. He also leaves behind 21 grandchildren, Carl and Carrie Tannahill of Seattle, WA, Rachel and Jason Hahn of Youngsville, NC, Rebekah and Zak Johnson of Spokane, WA, Daniel and Ashley Tannahill of Hixson, TN, Gracia and Bradley Matlack of Shawnee, KS, Victoria and Grant Hardaway of Arlington, TX, Jacob, Laura and Isaiah Johnson of Mansfield, TX, Nathaniel and Ashley Harwerth of Sterling, CO, Stephen Harwerth of Ainsworth, NE, Paul, Luke Harwerth of Belton, MO, Charissa Harwerth of Fort Morgan, CO and Kimberly, Andrew, Jennifer, Jason, Vanessa, Tabitha and Katrina Stalcup of Tingley, IA, eight great-grandchildren, Zachary, Ellora and Landon Tannahill, Jason Hahn, Jr., Eli and Ezekial Johnson, Kadence Tannahill and Titus Harwerth, one sister, Margaret Rensberger of Mentor, KS and two brothers, Sam Tannahill of Tahlequah, OK and Floyd Tannahill of Olathe, KS. Funeral services will be held at 3:30 p.m. on Sunday, January 25, 2015 at the Jubilee Center of Cedine Bible Mission. Rev. Stephen Zimmerman and Rev. John Williams will officiate. He will be laid to rest next to his wife in the Cedine Cemetery. Memorial contributions may be made to the Cedine Bible Mission. Please share your memories of Brother Howard on his on-line guest register at www.vanderwallfh.com. The family is being served by the Vanderwall Funeral Home in Dayton. They will receive friends Sunday from 2:00 p.m. to 3:30 p.m. at the Jubilee Center at Cedine Bible Mission.

Rev. Howard Adin Tannahill, age 78 of Spring City, TN went to be with his Lord and Savior on January 21, 2015. He was born May 21, 1936 at home in Caney, KS, the son of the late Cyrus Adin and Rachel Louetta (McCreight) Tannahill. He was raised... View Obituary & Service Information

The family of Rev. Howard Adin Tannahill created this Life Tributes page to make it easy to share your memories.

Send flowers to the Tannahill family.