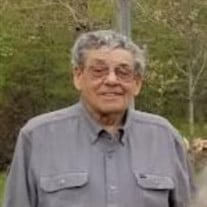 Harley Cecil Pelfrey, Sr., age 89 of Evensville Mountain, passed away at Rhea Medical Center in Dayton on Monday, December 27, 2021. He was born on May 9, 1932, in Old Washington, TN, the son of the late Thomas Albert “Ab” and Caroline (Russell) Pelfrey. He was also preceded in death by his siblings, Ruby (Lee) Roberts, Ethel Pelfrey, Fay (Lee) Clark, James S. (Dean) Pelfrey, Thomas Pelfrey, Robert W. Pelfrey, Tex (Loretta) Pelfrey, and Mildred (William) Cochran. Harley was raised in Evensville, moved to Michigan in 1951, and was a millwright for General Motors in Kalamazoo, MI, until his retirement in 1995. After he retired, he spent his summers in Hastings, MI, and his winters in Evensville. In 2007 he moved to Evensville for his year-round home. He was a member of the Middleville Lodge F&AM, was a dual member of the Dayton F&AM, and was a Past Master and Past Worthy Patron of Hastings OES#7. He is survived by his wife of 68 years, Glenda (Hays) Pelfrey of Evensville Mountain; his sons, Harley Cecil (Susanne) Pelfrey, Jr. of Iowa City, Iowa, Billy Joe (Cintia Finkler) Pelfrey of Evensville Mountain; his sister-in-law Cecille, wife of the late Robert Pelfrey of Dayton; and his five grandsons, Maxwell (fiancé Hannah Aslesen) Pelfrey of Sigourney, Iowa, Mitchell (Pauline Cushman) Pelfrey of Bagdad, AZ, Paul Pelfrey of Yucca, AZ, Brock Pelfrey of Evensville Mountain, and Brett Pelfrey of Iowa City, Iowa. Funeral services for Harley will be held on Friday, December 31, 2021, at 3:00 p.m. in the funeral home chapel with Rev. Von Dunn officiating. He will be laid to rest in Pierce Cemetery in Evensville. Pallbearers will be his five grandsons, Max, Mickey, Paul, Brock, and Brett Pelfrey; and Byron Morgan of Ocala, FL, a close family friend. Please share your memories and photos of Harley on his online guest register at www.vanderwallfh.com. The family is being cared for by Vanderwall Funeral Home in Dayton, TN, where they will receive friends on Friday, December 31, 2021, from 1:00 p.m. until the time of the service. Social distancing is strongly encouraged, and face masks are requested.

The family of Harley Cecil Pelfrey Sr. created this Life Tributes page to make it easy to share your memories.

Send flowers to the Pelfrey family.