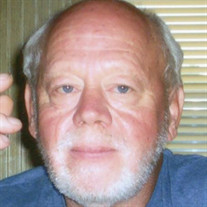 Frank “Poppa” Vetter Graysville, TN Frank “Poppa” Donald Vetter, age 72 of Graysville, TN passed away surrounded by his family on Sunday, August 13, 2017 in his home. He was born on May 12, 1945 in Queens, NY to the late Francis H. and Bertha M. (Gnip) Vetter. Born in NY, Frank grew up in Queens before relocating to Tennessee in 1979. He was a self educated man, and became a plumber pipe fitter for TVA before starting to build cabinets for Shamrock. He also helped build and maintain the Creek Site Trailer Park with Frieda Gadd. Frank served his country with the New York National Guard. He was of the Catholic Faith. Poppa is survived by his beloved baby sister, Linda White, special cousins Tommy Farley, Patty Farley, and niece Dawn Perkins, nephews Bryan, Shane and Eric Keddy, all of New York. His longtime friends, Frieda Gadd of Graysville, and Garland Miles. He is also survived by his daughters Sheila (David) Vickers and Lisa Cox of Graysville, in addition to his son, Francis D. Vetter II of New York. Frank leaves behind his grandchildren, Star (Zach) Levi, Dominique Drake, Kimmy (Josh) Williams, Jacob Hensley and Joseph Berry. His great grandchildren include James (Regan) Creasman, Cheyenne Creasman, Zeke Levi, Natalie, Ethan and Destiny Williams, all of Graysville, as well as Garrett Civic, Sawyer Kade and Aleea Marie. A funeral service will be held in the funeral home chapel on Friday at 1:00pm with Rev. John Fields officiating. He will be laid to rest in the Shubird Cemetery at Lewis Chapel. Please share your memories of Poppa in his online guest register at www.vanderwallfh.com. The family is being cared for by Vanderwall Funeral Home in Dayton where they will receive friends on Friday from 9:00am until 1:00pm. The family would like to give a special thanks to the Hospice of Chattanooga for their care, compassion and guidance.

The family of Frank "Poppa" Donald Vetter created this Life Tributes page to make it easy to share your memories.

Send flowers to the Vetter family.