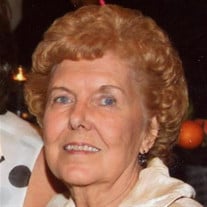 Elsie Lucretia Beene Robinson, 83, died Saturday at her home in Dayton. Her family was among the first settlers in Rhea County, arriving early in the 18th century. An outstanding student, Elsie was valedictorian of her 1949 class at Rhea County High School and graduated with honors in 1953 at the University of Tennessee. While she was President of Delta Gamma sorority, she began dating and became engaged to her Phi Gamma Delta beau, William E. Robinson. They married in 1952 at the First Methodist Church in Dayton. They relocated several times while Mr. Robinson was on active duty as a pilot and jet instructor in the United States Air Force, returning to Dayton in the late 1950’s. Their Dayton home was the neighborhood gathering place throughout the family’s early years. Together, with their three children, they rode bikes, shot hoops, and spent cool evenings catching fireflies and watching the night skies. Her talents were compliments to her husband’s work in the family apparel business, Robinson Manufacturing. Elsie’s love of textiles was apparent as she decorated her home in true mid-century modern style and designed and crafted her daughters’ special occasion dresses. Elsie was an avid gardener and a member of Four Seasons Garden Club in Dayton. There were always flowers to clip and arrangements to be made for her friends from her greenhouse. Since the early 1960’s the Robinson family spent summers in the Golden Isles. The Robinson’s second home was in St. Simons Island, where they were members of the East Beach community and the St. Simons Methodist Church. They enjoyed breakfasts with island friends at Dresner’s in the village and dinners at Fredrica House. Together with her husband, Elsie enjoyed evenings around the piano playing and singing standards from The American Songbook. This love of music was her gift to her children and grandchildren and now great grandchildren. A lifelong Girl Scout and troop leader for 30 years, she also served on the Moccasin Bend Girl Scout Council. Elsie and her husband were honored for their community service and philanthropy as Grand Marshals of Dayton’s 2008 Horse & Carriage Christmas Parade. Born July 19, 1931, Elsie was preceded in death by her parents, Mildred Emeline Bowman Beene & Homer Theron Beene. Survivors include her husband of 62 years, William Eugene Robinson; children, Joan Robinson Whiteside, Knoxville; Katherine Robinson Griffin and son-in-law, Ray W. Griffin, Dayton, and John Charles Robinson and daughter-in-law, Angela Robinson, New York. Also surviving are Elsie’s brother, Reece Anderson Beene (Lillian); her beloved grandchildren, Emily McCoy (Andrew); Grace McNeilly (Brandon); Ben Whiteside, Knoxville; Christopher Robinson, Hallandale Beach, Florida; Daniel Robinson (Nicole), Wellington, Florida; William Robinson, New York; Matilda Griffin Patton (Clay), and Ray W. Griffin III (Nini), Chattanooga. Elsie delighted in her great-grandchildren, Lucy McNeilly and Lily McCoy; Knoxville, and Will, Mac, Jack Patton and Charlie Griffin, Chattanooga. Funeral services will be held at 5 p.m. Monday at the First United Methodist Church of Dayton with the Reverend Ken Pierce officiating. The family will receive friends from 3 p.m. at the church until the hour of the service. Burial will be on Tuesday morning at 11 at Rhea Memory Gardens. Honorary pallbearers are members of Girl Scout Troop 362 of Dayton. Donations may be made to the First United Methodist Church, of Dayton, 993 Market Street, Dayton, TN 37321. Please share your memories of Elsie on her on-line guest register at www.vanderwallfh.com. The family is being served by the Vanderwall Funeral Home.

Elsie Lucretia Beene Robinson, 83, died Saturday at her home in Dayton. Her family was among the first settlers in Rhea County, arriving early in the 18th century. An outstanding student, Elsie was valedictorian of her 1949 class at Rhea County... View Obituary & Service Information

The family of Elsie Lucretia Beene Robinson created this Life Tributes page to make it easy to share your memories.