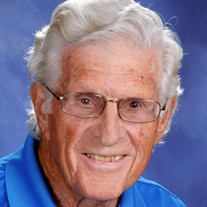 Elmer D. Vanderwall, age 95 of Dayton went to be with his Lord Jesus Saturday afternoon, February 14, 2015 at his son’s home in Dayton with Tom and Jan at his side. He was born October 16, 1919 in Muskegon, MI to the late Edward and Bertha (Hanekamp) Vanderwall and was also preceded in death by his beloved wife of 66 years, Donna (DeGroot) Vanderwall, his sister, Stella Wagner and two brothers, Donald Vanderwall and Harold Vanderwall. Elmer was a graduate of Muskegon High School, class of 1937. He served his country with the US Army as a First Lieutenant during WWII in the South Pacific earning a Bronze Star with Oak Leaf Clusters. He retired as the hardware department manager with Sears after 37 years. In 1979 Elmer began working with his son as a funeral director’s assistant and continued that role until several years ago. He and Donna moved to Dayton, TN in 1987. He loved his yard work, especially mowing his yard which he was able to do until several months ago. He also loved to sun himself on his patio whenever weather permitted. While living in Muskegon he was an active member of Laketon Bethel Reformed Church and in Dayton he was a member of Grace Bible Church where he had served as an elder. He is survived by his two sons, Tom (Jan) Vanderwall of Dayton, TN and David (Sandi) Vanderwall of The Villages, FL, six grandchildren, Adam (Erin) Vanderwall of Shaker Heights, OH, Aaron (Megan) Vanderwall of Cookeville, TN, Alex (Lisa) Vanderwall of Dayton, TN, Kaley (Dan) Reid of Dayton, TN, Andy Vanderwall of Dayton, TN and Stacey (Layton) Hebert of DeQuincy, LA, seven great-grandchildren and his brother, James (Donna) Vanderwall of LaQuinta, CA. Funeral services for Elmer will be held Thursday evening at 7:00pm in the funeral home chapel with his pastors, Dr. Doug Russell and Rev. David Snyder officiating. He will be laid to rest next to his wife Donna on Friday at 12 noon in Rhea Memory Gardens followed by a white dove release. Please share your memories of Elmer on his online guest register at www.vanderwallfh.com. Memorial contributions may be made to the Cumberland Springs Bible Camp in Dayton, TN. The family is being served by the Vanderwall Funeral Home in Dayton, TN where they will receive friends Thursday after 4:00pm.

Elmer D. Vanderwall, age 95 of Dayton went to be with his Lord Jesus Saturday afternoon, February 14, 2015 at his son&#8217;s home in Dayton with Tom and Jan at his side. He was born October 16, 1919 in Muskegon, MI to the late Edward and Bertha... View Obituary & Service Information

The family of Elmer D. Vanderwall created this Life Tributes page to make it easy to share your memories.

Elmer D. Vanderwall, age 95 of Dayton went to be with his Lord...

Send flowers to the Vanderwall family.