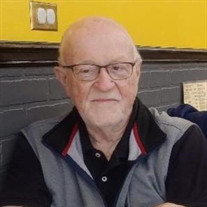 Edward D. de Rosset, of Dayton, TN, passed away on Friday, October 29, 2021, at the Life Care Center of Rhea County, TN. He was 77. Ed was born in Plainfield, NJ, in 1944, the son of late Edward M. and Joyce Hirschy de Rosset. Ed grew up in Trujillo, Peru, where his parents served as missionaries. He later moved to western Pennsylvania where he attended public schools and graduated from Evans City High School in 1962. Following high school, he entered Berea College, Berea, KY, where he majored in English and graduated with a bachelor’s degree in 1966. He then went to work in the student life office at the college, and later earned a master’s degree in college administration at Eastern Kentucky University, Richmond. Ed worked for a time as a photographer’s assistant in Butler County, PA, before accepting a position as dean of students at National Business College, Roanoke, Va. In the mid-1980s he moved to Barbourville, KY, where he was dean of students at Union College before becoming assistant to the president, and then later became president of the college. He retired in 2011. Ed attended First Baptist Church in Dayton, TN. In 2004 Ed married Lou Ann Hopper in Barbourville. She passed away in 2018. They had one daughter, Chloe Rose de Rosset, born in 2005, and she survives. In addition to his daughter, he is survived by a brother, Fred de Rosset, and sister-in-law Carol, of Berea, KY; a sister, Rosalie de Rosset, of Chicago, IL; a sister, Karin Traylor, and brother-in-law Jack, of Dayton, TN; and a niece, Rachel de Rosset, of Baltimore, MD. A memorial service is planned for Ed in Barbourville, KY, in the month of December 2021. Please share your memories and photos of Ed on his online guest register at www.vanderwallfh.com. The family is being cared for by the Vanderwall Funeral Home in Dayton, TN. Memorial gifts may be made to a scholarship fund established for Chloe de Rosset at Union College, 310 College St., Barbourville, KY, 40906, or to the scholarship fund at Bryan College, 721 Bryan Drive, Dayton, TN, 37321.

The family of Ed de Rosset created this Life Tributes page to make it easy to share your memories.