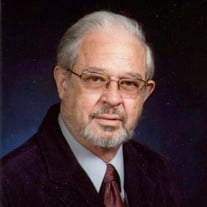 Earl Thomas Reed, Jr., age 77 of Dayton, went home to be with His Lord and Savior on Monday, January 3, 2022, at Rhea Medical Center in Dayton. He was born in Limrock, AL, on September 2, 1944, the son of the late Earl Thomas Reed, Sr. and Grace Irene (Hastings) Reed. Earl graduated from Scottsboro High School in Alabama. As a co-op with the Army Missile Command, Redstone Arsenal, AL, he attended Snead State Junior College and Auburn University where he earned a bachelor’s degree in 1966 and a master’s degree in 1968. He received another master’s degree from the University of Alabama (UAH), in Huntsville, AL, in 1979. He pursued a doctoral degree at UAH and at George Mason University in Fairfax, VA. Earl retired from Federal Civil Service in 2000, after 36 years with the U.S. Department of Defense on Redstone Arsenal, AL, and in Washington, D.C., (4 years as a co-op; 27 years with the Missile and Space Intelligence Center, Redstone Arsenal, AL; and four and a half years with the Defense Intelligence Agency, Washington, DC) where he was influential in the personal lives of co-workers as well as in our national defense. In 2000 Earl went to Bryan College in Dayton, TN, to establish the Computer Science program. He taught Computer Science, Mathematics, and Business until his retirement from Bryan in 2013. He was an avid reader, loved to garden, and was a member of Garrison Baptist Church. He loved to serve the Lord, and he had life-long service in various churches and in numerous capacities. He is survived by his wife of 58 years, Melba Ann (Jolley) Reed of Dayton; his son, Earl Thomas Reed III, of Madison, AL; his daughter Tommi-Leigh (Scott) Starick of Frederick, MD; and his grandchildren, Joshua Thomas Reed of Madison, AL, and Eric Allan Starick and Benjamin Otto Starick, both of Frederick, MD. Funeral services for Earl will be held on Tuesday evening, January 11, 2022, at 7:00 p.m. in the funeral home chapel with Rev. Mike Breeden officiating. He will be laid to rest in the Blue Spring Cove Hall Cemetery in Scottsboro, AL, on Thursday, January 13, 2022, at 4:00 p.m. EST. Please share your memories and photos of Earl on his online guest register at www.vanderwallfh.com. The family is being cared for by Vanderwall Funeral Home in Dayton, TN, where they will receive friends before the service.

Earl Thomas Reed, Jr., age 77 of Dayton, went home to be with His Lord and Savior on Monday, January 3, 2022, at Rhea Medical Center in Dayton. He was born in Limrock, AL, on September 2, 1944, the son of the late Earl Thomas Reed, Sr. and Grace... View Obituary & Service Information

The family of Earl Thomas Reed Jr. created this Life Tributes page to make it easy to share your memories.

Send flowers to the Reed family.