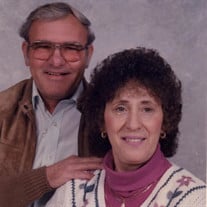 Donna Fay Williamson, age 79, of Dayton, passed away Tuesday afternoon, November 19, 2019 at her home in Dayton. She was born on February 5, 1940 in Sparta, TN, the daughter of the late John “Hack” and Jessie Mildred (Stevens) Fish. Donna was also preceded in death by her husband, Vernal Williamson, her daughter, Rhonda Chilkott and several brothers and sisters. Donna lived in Dayton since 1993 and previously lived in Pontiac, MI. She was a machine operator at GP Plastics in Rochester Hills, MI and at Robinson Mfg. in Dayton. Donna enjoyed shopping and attended The Grove Church in Dayton. She is survived by her three sons, Tim (Diane) Williamson, Mark (fiancé, Kathy Belk) Williamson and Craig Williamson, all of Dayton; eight grandchildren; nine great-grandchildren; one great-great-grandson; four brothers, Gary (Helen) Fish of Kentucky, Randy Fish of West Virginia, Mitch Fish of West Virginia and Keith (Kim) Fish of Kentucky; and four sisters, Sandra (Doug) McCoy of Kentucky, Marsha (Bo) Gibson of Kentucky, Tonya (Jack) McBrayer of West Virginia and Norma Adkins of West Virginia. Funeral services for Donna will be held Thursday afternoon at 3:00 p.m. in the funeral home chapel with Rev. Mike Breeden officiating. She will be laid to rest next to her husband Vernal in Rhea Memory Gardens. Please share your memories of Donna on her online guest register at www.vanderwallfh.com. The family is being cared for by the Vanderwall Funeral Home in Dayton, TN where they will receive friends Thursday after 12:00 noon.

The family of Donna Fay Williamson created this Life Tributes page to make it easy to share your memories.

Send flowers to the Williamson family.