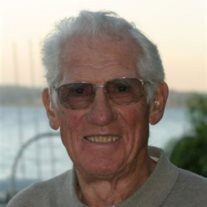 Donald Vanderwall Mercer Island, WA Donald James Vanderwall, age 91, of Mercer Island and formerly of Muskegon, MI, died Tuesday, February 11, 2014 in Bellevue, WA. He was born August 2, 1922 in Muskegon, MI to the late Edward and Bertha (Hanekamp) Vanderwall and was also preceded in death by his wife Margaret (VanderWall) Vanderwall and his sister Stella Wagner. He graduated in 1940 from Muskegon High School and in 1950 from Michigan State University with a degree in Mechanical Engineering. Don served his country in the Army Air Corps during World War II in the European Theatre as a 1st Lieutenant and B24 bomber pilot. Don lived in King County, WA since 1950 with the past 46 years on Mercer Island. Don was an aeronautical engineer retiring in 1991 after working 43 years for the Boeing Company. Don enjoyed fishing, skiing, dancing, gardening, swimming and snorkeling and was a longtime member of the Mercer Island Covenant Church. He is survived by his two sons, Bruce (Ann) Vanderwall of Seattle, WA and Mark (Lynn) Vanderwall of Mercer Island, WA; two daughters, Barbara Brown of Lake Oswego, OR and M. Jane (Andy) Person-Nydam of Olympia, WA; three brothers, Elmer Vanderwall of Dayton, TN, Harold (Wilma) Vanderwall of Fullerton, CA and James (Donna) Vanderwall of La Quinta, CA and eight grandchildren. A family graveside service for Don will be held Saturday, February 22, 2014 at Sunset Hills Memorial Park in Bellevue, WA where he will be laid to rest next to his wife Margaret. Please share your memories of Don on his online guest register at www.vanderwallfh.com. Memorial contributions may be made to Young Life. The family is being served by the Vanderwall Funeral Home in Dayton, TN (423) 775-2662

The family of Donald Vanderwall created this Life Tributes page to make it easy to share your memories.

Send flowers to the Vanderwall family.