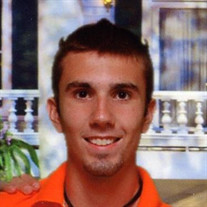 Dakota Evan Howard age 22 went to be with Jesus early Thursday morning, December 24, 2015. Dakota was born in Chattanooga on November 2, 1993. He was a graduate of Rhea County High School class of 2012 and was currently employed with Goins Heating & Air. He was a long time member of the New Union Baptist Church. Dakota was a “People Person” and loved to be with his family and friends. Dakota is survived by his parents, Charlie and Amy (Arnold) Howard of Dayton, his younger brother Drew Howard of Dayton, his sister, Cassi (Brandon) McMillon of Dayton, his grandparents, Billy “Max” and Frieda Arnold of Dayton, Frankie “Miss Frankie” Howard of Rockwood, uncle, Dennis (Brenda) Howard of Hixson, aunts, Donna Howard of Lenoir City, Angie (Joe) Wilkey of Spring City and Annette (Freddie) Combs of Chattanooga, nephew, Gunter McMillon, niece, Raven McMillon along with numerous cousins and friends. He is also survived by two special people in his life, his girlfriend, Rachel Nabors and his friend and buddy, Dustin Smith. Dakota was preceded in death by his grandfather, Bud Howard and special great-grandmother, Bessie Hood. Funeral services for Dakota will be held Monday afternoon at 12:00 noon at the New Union Baptist Church with Dr. Danny Ruehling and Dr. Barry Purser officiating. He will be laid to rest in the Spence Cemetery. Please share your memories of Dakota on his online guest register at www.vanderwallfh.com. Memorial contributions in Dakota’s memory may be made to his church, New Union Baptist Church. The family is being cared for by the Vanderwall Funeral Home where they will receive friends Sunday after 2:00pm. Dakota will also lie in state at the church one hour before his funeral.

Dakota Evan Howard age 22 went to be with Jesus early Thursday morning, December 24, 2015. Dakota was born in Chattanooga on November 2, 1993. He was a graduate of Rhea County High School class of 2012 and was currently employed with Goins... View Obituary & Service Information

The family of Dakota Evan Howard created this Life Tributes page to make it easy to share your memories.

Send flowers to the Howard family.