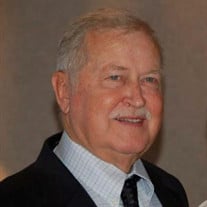 Charley Dean Corvin, age 85, of Dayton, went home to be with the Lord early Saturday morning, August 28, 2021. He was born on March 9, 1936 in Dayton and was preceded in death by his parents, James and Lilly Corvin, his brother, James “PeeWee” Corvin, and his granddaughter, Amanda Clark. Charley was a lifelong resident of Rhea County where he spent 42 years as a postal worker. He also served as choir director, clerk and council member at Dayton Church of God and spent many years singing Gospel music with The Travis Quartet. He was a United States Veteran stationed in Germany in the U.S. Army and spent his retirement years doing woodwork and craft shows. Charley’s love for the Lord was reflected in his love for his wife and family. He was blessed to spend 61 years of marriage to Priscilla (Harwood) Corvin. He leaves behind four children including David (Pam) Corvin, Suzanne (Leon) Clark, Crystal (David) Travis, and Jim (Kim) Corvin. He also leaves ten grandchildren, Christina McPherson, Chris Corvin, Nathaniel Corvin, Alex Clark, Daniel Clark, Sarah Crumbley, Courtney Travis, Chase Travis, Abigail Corvin and Ashton Corvin, as well as twelve great-grandchildren. Funeral services for Charley will be held Thursday afternoon, September 2, 2021 at 2:00 p.m. in the funeral home chapel with John McPherson officiating. He will be laid to rest in the Spivey Cemetery in Dayton. Pallbearers, Tom Kelly, Alvin Lewis, Chris Corvin, Chase Travis, Alex Clark, Xander McPherson. Please share your memories and photos of Charley on his online guest register at www.vanderwallfh.com. The family is being cared for by Vanderwall Funeral Home in Dayton where they will receive friends Wednesday afternoon, September 1, 2021 from 5:00 p.m. to 8:00 p.m.

The family of Charley Dean Corvin created this Life Tributes page to make it easy to share your memories.

Send flowers to the Corvin family.