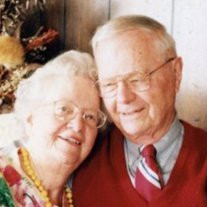 Rev. Charles H. Robinson, age 98, of Dayton, passed away Tuesday, November 19, 2013. He is survived locally by a daughter, Charlotte (David) McSpadden; a granddaughter, Anna (Chris) Hawkins of Kingston, and a grandson, Joseph McSpadden of Soddy-Daisy. Rev. Robinson was born March 8, 1915, in Philadelphia, PA, the son of Charles D. and Myra Robinson. He was married for 63 years to the late Anna Schwab Robinson. After a year as house parents at a Livingston, TN children’s home, they moved in 1940 to Leatherwood, KY where Rev. Robinson pastored churches in Perry County for the next 11 years and for a time taught Bible lessons in schools for the Scripture Memory Mountain Mission. He was ordained into the Southern Baptist ministry in Jenkins, KY and in 1951, moved to Harlan County, where he was pastor of the First Baptist Church of Loyall. In 1954, he became pastor of the First Baptist Church in Jacksboro, TN and remained there for the next 18 years. In 1972, he moved to Dayton, TN where he was director of public relations for Bryan College for 12 years. While in Dayton, he was a part-time pastor, continuing to preach every Sunday until shortly before his 90th birthday. His last pastorate was with the Clear Creek Baptist Church. Other survivors include: his children, Marshall (Carol) Robinson of Glastonbury, Conn., James (Bonnie) Robinson of Ft. Myers, Fla., Fred (Dianne) Robinson of Henderson, N.C., and Bill (Elizabeth) Robinson of Richmond, KY; 12 grandchildren; and 18 great-grandchildren. Please share your memories of Rev. Robinson at www.vanderwallfh.com. Memorial contributions may be made to The Gideons International. Funeral services will be held Thursday evening at 7:00 p.m. in the funeral home chapel with Rev. Milton Knox and Rev. Harold Newby officiating. He will be laid to rest next to his wife, Anna in Rhea Memory Gardens Friday morning at 11:00 a.m. The family is being served by the Vanderwall Funeral Home where they will receive friends Thursday from 4:00 p.m. until 7:00 p.m.

The family of Rev. Charles H. Robinson created this Life Tributes page to make it easy to share your memories.