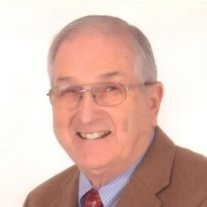 Richard Carlos Carter age 80 of Dayton went to be with his Lord and Savior Jesus Christ Saturday morning, May 25, 2013 at his home. Carlos was born in Wise, VA on February 7, 1933 the son of the late Claude and Ina (Purkey) Carter. He was also preceded in death by his wife of 62 years, Elizabeth “Betty” (Kiser) Carter, his son, Richard Carlos Carter, Jr., his brother, David Carter and his granddaughter Bethany Dianne Clariday. Carlos was a graduate of Virginia Tech in mechanical engineering, then earned his masters in mathematics at ETSU, also earned a masters at Xavier University in Cincinnati, OH and continued his graduate studies in education at UTK. In 1973 he came to Dayton where he was the business manager and also a professor at Bryan College. In 1981 he co-founded Rheaco Service and was still active in the business at the time of his death. Carlos was a member and past president of the Dayton Rotary Club, a member of Gideons International and a director since 1995 with the Conditioned Air Association of Georgia. He was a member of Grace Bible Church where he had served as business manager and Elder. Carlos is survived by his son, Phil (Donna) Carter of Chattanooga, his daughter, Debby (Jim) Conner of Dayton, three grandchildren, Jeff Carter of Red Bank, Melanie Carter of Dayton and Scott Carter McCuiston of Dayton, two brothers, Edward (Kazia) Carter of Charlotte, NC and Steven (Janet) Carter of Wise, VA, two sisters, Anita Healey of Saluda, VA and Diane (Danny) Mullins of Wise, VA. Carlos is also survived by his fiancee’ Brenda Fuson of Dayton. Funeral services for Carlos will be held Monday evening at 7:00pm at Grace Bible Church with his pastors, Dr. Doug Russell and Rev. David Hobbs and Rev. Joe Runyon officiating. The family will receive friends at the church after 4:00pm Monday. He will be laid to rest next to his wife Betty in Rhea Memory Gardens Tuesday morning at 11:00am. Please share your memories of Carlos on his online guest register at www.vanderwallfh.com. Memorial contributions may be given in Carlos’ memory to Gideons International. The family is being served by the Vanderwall Funeral Home in Dayton, TN.

Richard Carlos Carter age 80 of Dayton went to be with his Lord and Savior Jesus Christ Saturday morning, May 25, 2013 at his home. Carlos was born in Wise, VA on February 7, 1933 the son of the late Claude and Ina (Purkey) Carter. He was... View Obituary & Service Information

The family of Carlos Carter created this Life Tributes page to make it easy to share your memories.

Richard Carlos Carter age 80 of Dayton went to be with his Lord...

Send flowers to the Carter family.