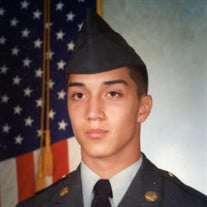 Billy Ray Tucker was born 48 years ago in Savannah, GA on April 17, 1973. He passed away November 19, 2021 at his mother’s home in Dayton. Billy was the beloved son of Charles Ray Tucker (deceased) and Loretta Knox Tucker. He was raised in Graysville and was a graduate of Rhea Co. High School Class of ’91. Billy proudly served his country in the US Army from 1992 to 1996. He was stationed in Kirchgoens, Germany, where he became a Corporal E4 and an ammunition specialist. He was awarded several medals including National Defense Service, Humanitarian Service, United Nations medal, Army Achievement medal, the Army Service medal and Overseas Service ribbons. He also served in battle in Somalia. Billy was employed by TVA as an electrical engineer. He enjoyed fishing, golfing, wrestling and baseball. He loved spending time with his friends and family, especially the cook-outs, fish frys and reunions at his parent’s home on the lake every summer. Billy attended the Sale Creek Church of God. His memory will forever be cherished by his mother, Loretta Knox Tucker; his daughter, Haley Tucker; two grandsons, Kameron Davis and Chandler Michaels; two sisters, Angie (Rob) Bybee of Bowling Green, KY and Gena Tucker of Dayton; and his nephew Parker Bybee of Bowling Green, KY. Billy was preceded in death by his dad, Charles Ray Tucker and his niece, Kristian LaRae Lee. Funeral services for Billy with military honors will be held Sunday, November 21, 2021, at 3:00 p.m. at Vanderwall Funeral Home chapel with Brad Tucker, Rev. Terry Bolton and Rev. Clyde Fitzgerald officiating. He will be laid to rest next to his family at Rhea Memory Gardens in Dayton. Pallbearers, Jason Palmer, Tony Carter, Scott Ehmig and Jessie Goins. Please share your memories and photos of Billy on his online guest register at www.vanderwallfh.com. The family is being cared for by the Vanderwall Funeral Home in Dayton where they will receive friends Sunday, November 21, 2021 from 1:00 to 3:00 p.m.

Billy Ray Tucker was born 48 years ago in Savannah, GA on April 17, 1973. He passed away November 19, 2021 at his mother&#8217;s home in Dayton. Billy was the beloved son of Charles Ray Tucker (deceased) and Loretta Knox Tucker. He was... View Obituary & Service Information

The family of Billy Ray Tucker created this Life Tributes page to make it easy to share your memories.

Billy Ray Tucker was born 48 years ago in Savannah, GA on April...

Send flowers to the Tucker family.