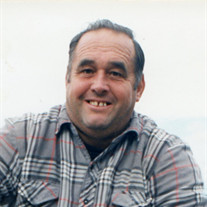 William “Bill” Albert Sligh, Sr. age 67 of Dayton died at his home Saturday afternoon December 13, 2014. Bill was born in Rhea County on February 25, 1947 to the late Woodrow and Myrtle (Smith) Sligh. He was also preceded in death by his brother, Roy Sligh and his great-grandson, Blaz Deckar Johnson Baldwin. Bill was a lifelong resident of Rhea County where he was a commercial fisherman and rock mason. He loved country music and was of the Baptist faith. He is survived by his wife of 37 years, Kathryn (Ballard) Sligh, eleven children, Ginger Sligh, Betty Jo Everett, Janie Parton, Mylinda Green, John (Chassidy) Ballard, Charlie (Roseann) Sligh, Paula Sligh and Johnathon Sligh all of Dayton, William “Josh” Sligh, Jr. of Chattanooga, Mary Ruth Gilbert of Spring City and Frankie Sligh of Spokane, WA, two sisters, Mary Crowe and Doris (Randy) Alvey both of Dayton, twenty-four grandchildren, sixteen great-grandchildren and several uncles, aunts and cousins. Please share your memories of Bill on his online guest register at www.vanderwallfh.com. The family has requested contributions be made to the funeral home to assist with Bill’s funeral expenses. The family will receive friends Tuesday afternoon from 12 noon until 3:00pm at the Vanderwall Funeral Home after which Bill will be taken to his home property to be laid to rest.

The family of Bill Sligh created this Life Tributes page to make it easy to share your memories.

Send flowers to the Sligh family.