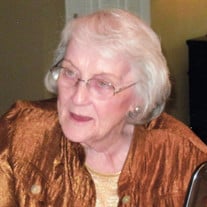 Jarvis,Betty Jane, age 87 of Dayton, TN passed away peacefully with her family by her side Oct. 28, 2014. She was born March 8, 1927 in Rockwood, TN. She was of the Christian faith, and a member of the First Christian Chruch Disciples of Christ,... View Obituary & Service Information

The family of Betty Jane Jarvis created this Life Tributes page to make it easy to share your memories.

Send flowers to the Jarvis family.