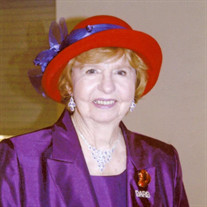 Barbara Dolores Chambers Trowell, age 88, went home to her Lord and Savior, Jesus Christ, on September 3, 2021 at Life Care Center in Dayton, TN. She was born March, 8, 1933, in Salisbury, NC to Sherman and Nona nee Holbert Chambers. Barbara graduated from Miami Edison High School in Miami, FL in 1951. After high school earned a Bachelor of Arts in Education from the University of Florida and Master of Education from the University of Miami. She began her career teaching Elementary School at Mae M. Walters Elementary School, Miami-Dade County, Hialeah, FL. She taught Mathematics and was a Guidance Counselor in Rhea County High School, Dayton, TN for many years. After retirement she taught Math at Chattanooga State at the Dayton campus. Barbara was married to Roger Trowell September 2, 1953. They were happily married for over 50 years. She is preceded in death by her husband, Roger Trowell, her parents, Sherman and Nona Chambers, her sister, Gloria Jane Thomas, and her eldest son, Robert Scott Trowell. She is survived by her daughters, Sherlen Bingham (Brock) of Elkton, MD, Christine Suddarth (Robert) of Kansas City, MO; her sons, Randall Trowell (Karen) of Soddy-Daisy, TN, and Roger Eric Trowell (Elizabeth) of Dayton, TN; her sister, Shirley Jean Campbell (Charles) of Elkview, WV; twelve grandchildren and eleven great-grandchildren. Funeral services for Barbara will be held Thursday, September 9, 2021 at 2:00 p.m. at Vanderwall Funeral Home in Dayton with Rev. Brock Bingham officiating. She will be laid to rest at Rhea Memory Gardens in Dayton, TN. Please share your memories and photos of Barbara on her online guest register at www.vanderwallfh.com. The family is being cared for by Vanderwall Funeral Home in Dayton where they will receive friends Thursday afternoon, September 9, 2021 from 1:00 p.m. to 2:00 p.m. Memorial contributions may be made to Grace Bible Church in Dayton, TN.

The family of Barbara Dolores Trowell created this Life Tributes page to make it easy to share your memories.

Send flowers to the Trowell family.