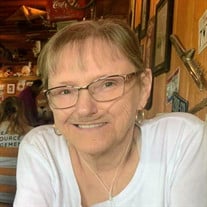 Barbara Ruth Manning, age 71 of Evensville, passed away on Tuesday, November 2, 2021 at her home in Evensville. She was born on July 31, 1950 in Evensville, the daughter of the late Earsel Lee Couch and Flossie Mae (Newby) Couch. Barbara was also preceded in death by her sisters, Betty Pelfrey, Faye Douglas and Dora Meadows; her brothers, Earsel (Red) Couch Jr. and Robert Couch. Barbara lived in Evensville all of her life. She worked as a secretary in several banks in the area and TVA, and then was a manager for the Walmart Vision Center for the past 15 years. Barbara enjoyed shopping and was a member of the Dogwood Baptist Church in Grandview Mountain. She is survived by her husband of 44 years, Tommy Manning of Evensville; her daughters, Angela Manning of Dayton and Amanda (Jim Jr.) Hall of Evensville; her grandchildren, Blake (Hannah Long) Manning of Morristown, Breanna (Dusty) Keith of Spring City, Hannah Hall of Evensville, Spc. Hall, Augustin “Gus” of the Army National Guard, Abbigail Hall of Evensville, Jimmy Hall of Knoxville and Jon Hall of Dayton; her great-grandchildren, Braxton Manning, Carter Manning both of Morristown and Emersyn Hall of Newport; her sisters, Frances Pelfrey, Ruby Ezell both of Evensville, Sue Browder of Decatur and Nancy Shaw of Pulaski; her brothers, Leon (Ava) Couch of Chattanooga, Don (Betty) Couch of Cleveland, James Couch of Dayton and Eddie Couch of Calhoun, GA; and lots of nieces and nephews. Funeral services for Barbara will be held on Thursday, November 4, 2021, at 12:00 noon at the funeral home chapel with Bro. Donald Umphry officiating. She will be laid to rest at Dogwood Baptist Church Cemetery. Pallbearers, Jim Hall Jr., Dustin Keith, Blake Manning, Jon Hall, Jimmy Hall and Nate Kaveshan. Please share your memories and photos of Barbara on her online guest register at www.vanderwallfh.com. The family is being cared for by the Vanderwall Funeral Home where they will receive friends Wednesday, November 3, 2021 from 5:00 p.m. to 8:00 p.m.

Barbara Ruth Manning, age 71 of Evensville, passed away on Tuesday, November 2, 2021 at her home in Evensville. She was born on July 31, 1950 in Evensville, the daughter of the late Earsel Lee Couch and Flossie Mae (Newby) Couch. Barbara was... View Obituary & Service Information

The family of Barbara Ruth Manning created this Life Tributes page to make it easy to share your memories.

Barbara Ruth Manning, age 71 of Evensville, passed away on Tuesday,...

Send flowers to the Manning family.