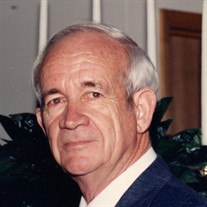 Arnold Jarvis Dayton Arnold Wayne Jarvis, age 91 of Dayton passed away Sunday, October 1, 2017 at Rhea Medical Center. Arnold was born in North Wilkesboro, NC on August 9, 1926, the son of the late Joseph Porter and Isabelle (Marsh) Jarvis He was also preceded in death by his step-father Ray Basil Jarvis. Arnold served his country with the US Army during World War II. He lived in Rockwood, Decherd, Clarksville, Scottsboro, Al, and moved to Dayton in 1989. He was employed with TVA Construction and Tennessee Civil Engineers as a Labor Superintendent where he later retired. He is survived by his son, Robert W. Jarvis of Dayton, daughter(s) Nancy (George) Thomas, Dayton, and Margaret (Dick) Cole of Knoxville. Grandchildren Michael (Sheena) Cole, Knoxville and Melissa (Tim) Smith, Knoxville, and great-grandchildren, Robert (Meaghan) Allen, Harriman, and Dalton and Maddie Cole, Knoxville, and sister Hazel (John) Carroll, Pleasant Grove, NC. Funeral services for Arnold will be held Tuesday at 1:00 p.m. in the funeral home chapel with Rev. John Fields officiating. He will be laid to rest in Rhea Memory Gardens with Military Honors. Please share your memories of Arnold on his online guest register at www.vanderwallfh.com The family is being cared for by the Vanderwall Funeral Home where they will receive friends before the funeral on Tuesday.

The family of Arnold Wayne Jarvis created this Life Tributes page to make it easy to share your memories.

Send flowers to the Jarvis family.