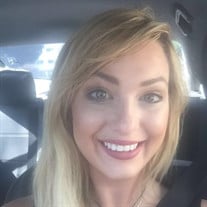 Amanda Skinner Dayton Amanda Roxanne Skinner, age 25 of Dayton, passed away peacefully on Monday, August 7, 2017 in Los Angeles, CA. She was born on July 15, 1992 to Jeffery Skinner and Laura Masterson Coffman. She is also preceded in death by her great-grandparents, Mildred and Ernest (Mac) McBay, Eva Lena and Floyd Lester Porter, Barbara Pope and Johnny Louallen. Amanda loved to hike. One of her greatest joys was hiking the Appalachian Trail where she found and rescued her beloved dog, Ranger. She often said that they rescued each other. Her passion was writing and poetry. Amanda was honored with the Creative Writing Award from Baylor School her senior year. She went on to earn a Bachelor’s of Science degree in psychology from the University of Tennessee at Chattanooga. She was a member of the PSI CHI International Honor Society in psychology. Amanda leaves behind her father, Jeffrey (Angie) Skinner of Dayton, her mother, Laura (Steve) Coffman of Redbank, TN. Her sister, Cinnamon (Bassel) Dakhlallah of Chattanooga, and her brother, Ben (Danielle) Skinner, also of Chattanooga. She is also survived by her step-sister, Brittany Kubba and her children of Dayton. She is also survived by her grandparents, Bonnie (Gary) Louallen of Dayton, Patricia (Neal) Marshall of Spring City, and Ron (Loretta) Masterson, also of Spring City. She is also survived by her great-grandfather, Don Pope of Dayton. Amanda also leaves behind her beloved Ranger, in addition to many aunts, uncles, cousins, and friends. A funeral service for Amanda will be held on Thursday at 6:00pm in the funeral home chapel with Pastor Mack Louallen officiating. She will be laid to rest at Rhea Memory Gardens. Please share your memories of Amanda in her online guest register at www.vanderwallfh.com. The family is being cared for by Vanderwall Funeral Home in Dayton where they will receive friends on Thursday from 4:00pm until the funeral.

The family of Amanda Roxanne Skinner created this Life Tributes page to make it easy to share your memories.

Send flowers to the Skinner family.